One of my favourite concert movies, Rockshow was only shown briefly in movie theaters, and the closest to me was in Stockholm. But when it was released for home video in 1981, I finally got to see it. It had to be rented (in the early days video cassettes were rented, not sold), but after a couple of years I was also able to buy it. A missing title from DVD release plans, it's very popular among bootleg DVD's but sadly it's incomplete in most instances. Most bootleg DVD's are video cassette rips, and a select few are from the laserdisc. But both of these are incomplete, missing 7 songs from the theatrical version: "Call Me Back Again," "Lady Madonna," "The Long And Winding Road," "Picasso's Last Words (Drink To Me)," "Richard Cory," "You Gave Me The Answer" and "My Love". That's a video cassette rip. The laserdisc rip may be missing only six of these, as "Picasso's Last Words (Drink To Me)" is present on that disc.

In 1998, the american music TV station VH1 showed Rockshow as part of their McCartney week. That version was also incomplete, as it was missing the two songs "Spirits Of Ancient Egypt" & "Magneto and Titanium Man", but it did feature the previously missing seven songs.
The official "Wingspan" DVD had two songs from Rockshow as bonus material: "Jet" and "Let 'Em In".
The official "McCartney Years" DVD also had a few songs from Rockshow, including the previously missing "Lady Madonna", but sadly that was a cropped version as the "McCartney Years" DVD was produced with a fake widescreen look, accomplished by panning and scanning the original film.
The ideal DVD bootleg of Rockshow can be created by merging the laserdisc rip with the missing songs from VH1, substituting the laserdisc versions of "Jet" and "Let 'Em In" with their "Wingspan" counterparts, and utilising the soundtrack of the "McCartney Years" songs of the songs "Venus and Mars/Rock Show," "Jet," "Maybe I'm Amazed," "Lady Madonna," "Listen to What the Man Said" and "Bluebird". 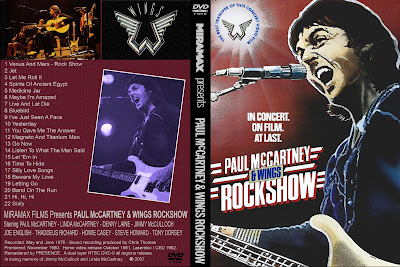 Meanwhile, the best looking version available seems to be this 2007 DVD, remastered by "Presence".
Posted by wogew at Wednesday, August 27, 2008

I was AT that king done show right up front. Was Stunning.