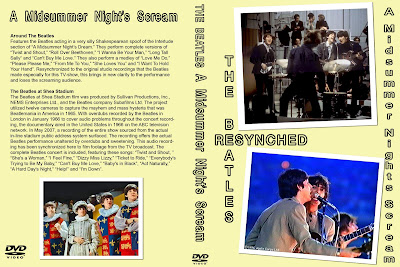 Around The Beatles
Features the Beatles acting in a very silly Shakespearean spoof of the Interlude section of “A Midsummer Night’s Dream.” They perform complete versions of “Twist and Shout,” “Roll Over Beethoven,” “I Wanna Be Your Man,” “Long Tall Sally,” “Can't Buy Me Love” and "Shout". They also perform a medley of “Love Me Do,” “Please Please Me,” “From Me To You,” “She Loves You” and “I Want To Hold Your Hand”.

Resynchronized to the original studio recordings that the Beatles made especially for this TV-show, this brings in new clarity to the performance and loses the screaming audience. The synch job is flawless, the mistakes we see on the screen are when The Beatles themselves miss a line or three. Sourced from two different editions of the Around The Beatles Special, most of the concert footage has been sourced probably from "Ready Steady Go! Special Edition: The Beatles Live" from the 80's video cassette. The Shakespeare segment is presented in black and white on this DVD. The other artists from Around The Beatles are not included in this presentation.

The Beatles at Shea Stadium
The Beatles at Shea Stadium film was produced by Sullivan Productions, Inc.,
NEMS Enterprises Ltd., and the Beatles company Subafilms Ltd. The project utilized twelve cameras to capture the mayhem and mass hysteria that was Beatlemania in America in 1965. With overdubs recorded by the Beatles in London in January 1966 to cover audio problems throughout the concert recording, the documentary aired in the United States in 1966 on the ABC television network. In May 2007, a recording of the entire show sourced from the actual in-line stadium public address system surfaced. The recording offers the actual Beatles performance unaltered by overdubs and sweetening. This audio recording has been synchronized here to film footage from the TV broadcast. The complete Beatles concert is included, featuring these songs: “Twist and Shout, ” “She's a Woman,” “I Feel Fine,” “Dizzy Miss Lizzy,” “Ticket to Ride,” “Everybody's Trying to Be My Baby,” “Can't Buy Me Love,” “Baby's in Black”, “Act Naturally,” “A Hard Day's Night,” “Help!” and “I'm Down”.

This has been a case of using the audio as a basis and synching footage to this audio, not the other way around - and a good job at that. Audience shots and locker room footage has been used to fill in the missing gaps, especially on the two songs that were never part of the original TV broadcast, "She's A Woman" and "Everybody's Trying To Be My Baby". It's maybe a bit annoying to see the same audience shots over and over, your mileage may vary. The video used is consistant in quality throughout, and seems to be taken from the Darthdisc ABC Master version. The other artists and the pre-concert footage from The Beatles Shea Stadium are not included in this presentation. During the credits, the audio is from an interview with John Lennon about the concert.
The DVD finishes with three songs as "raw stereo extracts" from the Around The Beatles Special.
Posted by wogew at Tuesday, October 14, 2008