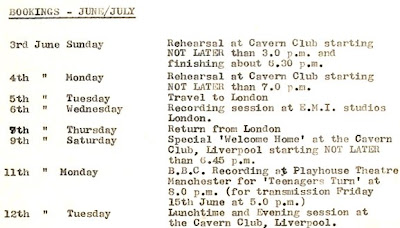 Some documents that previously belonged to former Beatles' drummer Pete Best have appeared at the upcoming Bonham's auction in London. These are prelimenary booking schedules, presumably from Brian Epstein's office as information for "the boys".
Some dates previously unmentioned by Miles and Lewisohn appear before the June 6th famous "first recording session" at EMI. Not surprisingly, the 3d and 4th of June are spent rehearsing for the imminent recording session - at The Beatles' "home away from home", the Cavern Club.
The whole of the 5th is set aside for the journey to London. A day is also set aside for the journey home, on the 7th. The booking schedules poignantly end with dates which Pete Best was going to miss. He was fired by Brian earlier in the day and didn't show up for the Riverpark Ballroom gig in Chester on the 16th of August. Filling in for Pete on that date and the next was Johnny "Hutch" Hutchinson, drummer with The Big Three. Ringo made his debut as the new drummer on the 18th at Hulme Hall.
Brian's booking schedule shows that The Beatles were going to play together with Clinton Ford at the Cavern Club on Sunday the 2nd of September, whereas Miles has them sharing the bill with Kingsize Taylor & The Dominoes and The Zenith Six Jazz Band.

Lot description:
Lot No: 532
The Beatles
Beatles concert material,
1962,
comprising: a list of Principal Engagements - August/September, together with the original envelope addressed to Pete Best and postmarked 16 AUG 1962*, together with two carbon-copies of a list of bookings for July-August, one sheet annotated by Pete, and a handbill for Joe Brown/The Beatles at the Tower Ballroom, New Brighton, 27th July.
Estimate: £750 - £1000

*Note: The 16th of August 1962 was the day Brian summoned Pete to his office and fired him.

Link to Bonham's Auction
Posted by wogew at Friday, November 14, 2008