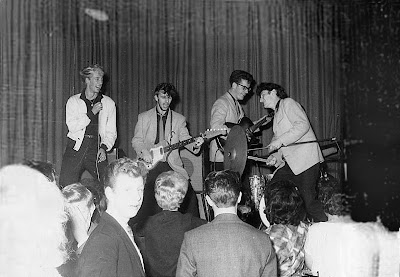 It's Ringo Starrtime with guitar hero Ringo and the Hurricanes
I was browsing through the live auctioneers website, doing an article on the new Eleanor Rigby item (follow this link for that) when I chanced upon a special item with an interesting story. Now just how did Ringo Starr's first cymbal from his time with the Eddie Clayton Skiffle group find it's way to a junk shop in Connecticut?
Here's what the auction site said:
Lot #250 from The Fame Bureau: Ringos Starr's first cymbal - A 14" Krut Special (made in England), that has "Richard Starkey 1958" engraved on the back.
The cymbal was purchased from a junk/ old furniture shop in Connecticut owned by a man whose father was a drummer back in the 40's & 50's, who has since past on, and used to live in England back then occasionally and would visit his mother who lived there.
He got this old cymbal at a music store, used it and then kept in an old smelly trunk with some sticks and drumheads. Krut cymbals were manufactured in the '50's by Premier Drum company, and were a cheap line of cymbals that they pushed. The word "Krut" was a marketing ploy by Premier that is "Turk" spelled backwards, to make the drummer believe it might be somehow be related to the Turkish "Zildjian" cymbals. Unfortunately the marketing plan probably backfired, & "Krut" sounded more like "Krud", a more accurate description of the sound of the cymbals.
Ringo's first cymbal, according to the Beatles Anthology, was an old junker that his step father had given him for Christmas sometime between 1956 & 1958.
This kit consisted of an old bass drum, snare drum, cymbal, and a few other odds & ends. Supposedly in 1958, Ringo (then Richard) borrowed 46 pounds from his Grandfather and bought his 1st legit drum kit, an Ajax with single headed toms at Frank Hussey's music store.
Ringo said his first drums were junk that he could play with anything that was available (including firewood).
This certainly fits the criteria of this cymbal, obviously before the Beatles time (where he later played Premier & Ludwig drums, and Zildjian cymbals. In 1958, Ringo (then Richard) was only 18 years old and just starting to gig with the Eddie Clayton skiffle band and play some odd gigs around town, where drummers would often sometimes share kits with the other bands playing.
According to the Beatles anthology, Richard (not owning a car yet) would travel to gigs on a bus with nothing more than a snare, hihat, and top cymbal. He may have just engraved his name on the back to help identify his stuff, (which makes perfect sense, as he was an apprentice engineer at H. Hunt & Son - two of his fellow band mates were a joiner & a lathe operator there).
If you refer to the "Drum Book" on page 31, Geoff Nichols mentions that Ringo used to play Ajax & Krut cymbals with Rory Storm.
Now, you decide if this is a tall tale or if it could be true.
Link to auction
Posted by wogew at Wednesday, November 12, 2008

I can see him writing his name on it, but why put a year? I've written my name on many guitar cases, but never would I write my name and the year I wrote it. What's the point except to get some gullable Beatles fan in 2008 to pay tons of money? Seems fishy. I'm sure the seller, like myself, has read all the Beatle bios andbis just looking out to scam someone.

I'm sure the seller is "not" out to scam someone, as "the seller" bought it from the junk shop owner who'd listed it on ebay, and thought (and I quote - spelling errors & all, which further proved their ignorance) "...and the maker's name 'Richark Starkey 1958' on the back" (ala Turkish K Zildjians were signed by their maker at the K Zildjian factory). The junk shop guys had no clue who Richard Starkey was. This cymbal was in an old trunk that belonged to the father of one of the guys in the junk shop, who was a jazz drummer in England playing clubs at the time Ringo was still "Richard". The only reason I would've been foolish enough to even be a high bidder for an awful cymbal like that, was because the "R" and "a's" in the engraving very closely match that of any of Ringo's signatures. Take a closer look.

I know this sounds crazy but it IS the truth. When I was first learning how to play the drums,my father bought me a 20" Krut ride cymbal. IT sounded Kruty all right and I felt at the time that it was given the correct name. I never heard any cymbal so bad sounding in my life. It turns out that I portrayed Ringo Starr for 24 years and have still been trying to find a great sounding crash ride or crash like his for many years. I just wanted to post this because we both experienced the same cymbal brand when we were both young. Yuch for Krut!