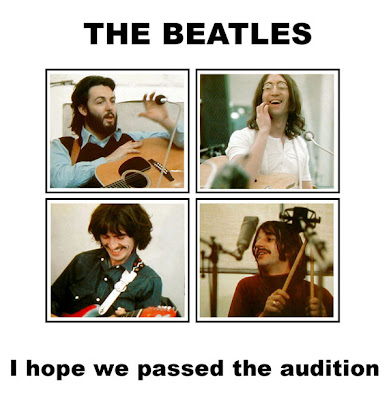 Click above image for a bootlegzone page containing artwork for an audio CD of the show
"I hope we passed the audition" were John Lennon's final words on behalf of The Beatles, at their very last public performance on the rooftop of the Apple offices in London on 30 January 1969.

Forty years later, this programme explains how the 'concert' came about, with contributions from those who witnessed the performance including Yoko Ono, director Michael Lindsay-Hogg, photographer Ethan Russell, engineer Alan Parsons, technician Dave Harries and the policeman who was sent by his superiors to "turn that noise off", Ken Wharfe.

The performance was part of the recording sessions for The Beatles' album Let It Be. The original plan was for the group to play three shows in December 1968 at the Roundhouse in north London. This did not come about, and the idea evolved for a single concert at an undecided location in January 1969.

Whilst being filmed for a forthcoming cinematic release, the group began rehearsing at Twickenham Studios on 2 January 1969. A number of possible locations for the live show were discussed during rehearsal, with the leading candidates being a Roman amphitheatre in North Africa or on a cruise ship.

Everyone involved in the Twickenham rehearsals considered them to be disastrous. By the third day the group openly discussed whether they should break up. George Harrison was increasingly resentful because while he was treated respectfully by musical peers including Bob Dylan and Eric Clapton, when working within The Beatles his songs were usually either derided or ignored.

Paul McCartney's attempts to hold the band together and rally spirits came across as controlling.

Lennon had all but withdrawn creatively from The Beatles, seldom contributing even to the arrangements of his own songs. And his companion and artistic partner Yoko Ono -- who often spoke on Lennon's behalf as he sat silently by -- was a major source of tension.

The intrusive film cameras and the cold, unfamiliar settings of Twickenham Studios also contributed to ill feelings. Harrison became fed up with Lennon's creative and communicative disengagement from the band, and on 10 January announced that he was "leaving the band now". He went to Eric Clapton's house and wrote Here Comes The Sun but within a few days he was persuaded to return to the group.

The live performance took place 30 January on the rooftop of The Beatles' Apple Building at 3 Savile Row in front of a small audience of friends and employees. The Beatles' final performance was cut short by the police but several of the songs recorded made it onto the final cut of Let It Be.

Listen to the BBC show here. You have 7 days to do it. After that, the BBC removes it.
Posted by wogew at Wednesday, January 28, 2009