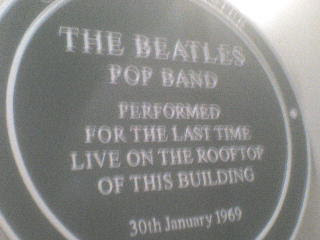 This plaque will be up on the building shortly. The inscription says: "City of Westminster THE BEATLES POP BAND PERFORMED FOR THE LAST TIME LIVE ON THE ROOFTOP OF THIS BUILDING 30th January 1969". 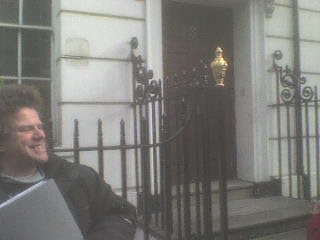 Got a message from someone over at Savile Row, telling me that they were granted access to the rooftop! Wish I was there.... That's Richard Porter of the British Beatles Fan Club in the photo. 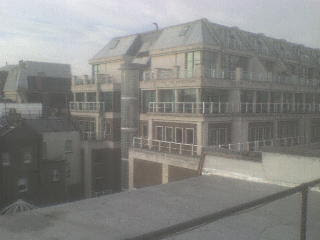 View from the top today. There's room at the top, they're telling you still... 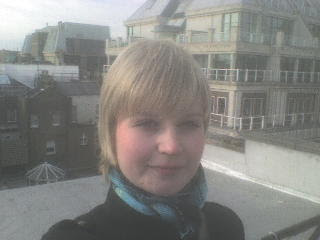 My friend Linda, president of Norwegian Wood, the norwegian Beatles Fan Club on the rooftop. 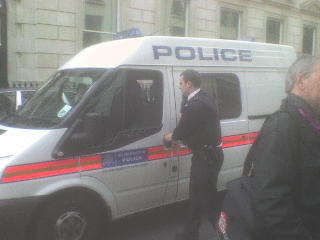 The police showed up again, wondering what the commotion was all about.

Linda tells me that they were let up to the rooftop in groups of 7 or 8. One of the police officers from 40 years ago was there, and also one of the original technicians from the famous concert.
Members of tribute band The Bootleg Beatles had intended to reenact the infamous gig which the original group played on the roof of the Apple building on Savile Row 40 years ago today.
Police and council officials pulled the plug on the set, citing health and safety fears.
However, gigwise.com reports that two members of the group - David Catlin-Birch, who plays Sir Paul McCartney, and Andre Barreau, who stands in for George Harrison - were able to perform anyway.
Instead of the full set as originally planned, the musicians took to the roof to play an acoustic version of One After 909.

Links to all the wogblog posts about the Concert at Savile Row Anniversary:

I have to dig out a mountain of slides, scan them, and post them, that I to in the 1980's on a trip to London. Have bunch of this very building.

Apparently, Charlie Watts also came by. The new owner of the building told someone that she's planning on opening a coffee shop with rooftop access!