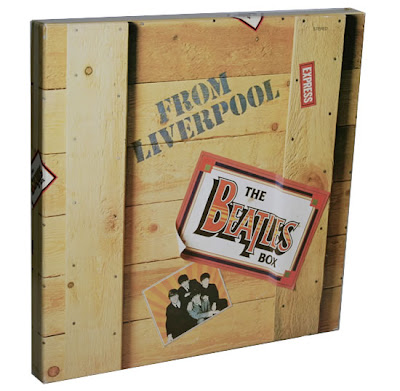 Back in 1981, World Records, EMI's mail order division put together a boxed set of eight newly compiled Beatles albums.
The set was advertised vigourously in the national press from 5th November 1980 through into 1981. This means it was at the forefront right across the period of John's murder, and therefore sales must have been quite good, but as this box set was sold only by mail order the figures did not qualify for chart entry, and consequently are not publicly known.
All the songs throughout the eight albums are arranged chronologically, and the covers reflect this, in that each has a picture from the appropriate period on the front, and a well-written biography of the period by Hugh Marshall on the rear.
The Box itself is well designed looking like a wooden crate (see detail above), with plenty of information and sold for £29:75.
And Simon Sinclair who compiled these albums seems to have known what he was doing, because he has sprinkled the albums with some interesting variations from the regular versions of the songs.
Main track differences from the regular Beatles albums in the UK:

I am extremely fortunate to have the Japanese version of this album. At my local used record shop I found a version released in Mexico on the Reader's Digest/Capitol label.

I just obtained a copy from New Zealand, also on the "Reader's Digest" label and unfortunately it matches the Japanese release.

Hi, I have this box set in good condition, also as far as I know it has a genuine John Lennon signature on the back. Would this make it worth much more?

John Lennon was killed in 1980, this boxed set was released a year later.

Actually, this set came out in 1980. That's when I got mine, I was a freshman in college.

You're right, the first advertisement for this boxed set appeared in the British media on the 5th of November 1980. So it's possible that Lennon may have signed one of them in the month before he was killed.

Roger I have a set also. Was given to me by a old gentleman. Are they worth anything. My set has 1980 Franklin mint.

The Mexican Version of this set has some of the special mixes of the rest of the world editions, but also has some different ones.

1. LOVE ME DO (Ringo on drums)
2. PLEASE PLEASE ME (Skips the first bass chord)
3. THANK YOU GIRL (Stereo, not much reverb)
4. ALL MY LOVING (hit hat intro)
5. MONEY (mono)
6. THIS BOY (Duophonic)
7. I SHOULD HAVE KNOWN BETTER (More a mistake than a different mix, in the last verse, the sound in the left channel seems to be taken from a spoiled tape)
8. AND I LOVE HER (long outro)
9. SLOW DOWN (mono)
10. I FEEL FINE (No whispering intro)
11. MR. MOONLIGHT (Mono, which is strange, since the rest of the songs in Disc 3 side A are in stereo)
12. HELP (James Bond intro)
13. ANOTHER GIRL (More a mistake than anything else, starting the song paul's voice seems to come from a throat with a phlegm, when singing the word "Got"
14. YOU LIKE ME TOO MUCH(first, it is mono and then it starts so low, and suddenly just before the first verse the sound becomes clearer, again a mistake)
15. I'VE JUST SEEN A FACE (mono)
16. DAY TRIPPER (American version)
17. RAIN (Another mistake, the sound in one channel disappears in ringo's bridge before the backwards recording)
18. PENNY LANE (trumpet ending)
19. ALL YOU NEED IS LOVE (mono)
20. I AM THE WALRUS (extra chord in the beginning and before "yellow matter custard")
21. WHILE MY GUITAR GENTLY WEEPS (At the beginning, it has the "Eh Oh" from the The Continuing Story of Bungalow Bill ending)
22. THE CONTINUING STORY OF BUNGALOW BILL (It has the intro but not the "Eh oh" at the end)
23.I'M ONLY SLEEPING (American version)

And I think that's all, the rest are regular versions in stereo, I might have skipped one or two "special" versions, It's been a long time I don't listen to this set, I think I'll do it over the next weekend.

Great Job Carlos, you caught some things that I didn't.

P.S. I love is also duophonic, I love this set, it was my first "important thing" about The Beatles, I was in Jr. High School and I was 14 the first time I got this, I have three sets now, The first one is the cassette edition, but in Mexico the tapes don't have the pictures on the cover, all 8 cassettes have the same cover, and Money (That's What I Want) has a fade out. Then I bought the vinyl edition, because of the covers and the notes at the back of them, BUT, Let It Be ends with a fade out!, of course it is a mistake, then I had the oportunity to buy it again, and everything was perfect, I had the opportunity to listen to the World Records Edition, that's why I know which versions are included in that one, but I don't have it though, friends: Any ideas where can I get it? or at least the sound and high-res scans of the covers to make my own box on CDs? I'll be glad to share mine, I'm not Doc Ebbetts but I can get pretty decent transfers from vinyl.

I wouldn't recommend the British version. The individual record covers are too big and used a lousy glue. The Australian version is a lot nicer with custom label that says "The Beatles".

The Japanese version is just beautiful. Also, it came out prior to 1987, which the EMI/Odeon used a special chemical on the vinyl that it never attracted dust. Which means you don't get the static or any popping noises. I've never seen a German version. Also, try to find the Japanese EP's that was re-issued in 1982.

There is a website that has Dr. Ebbetts versions of this record, but I don't think the moderator would like to type it in. Plus I don't need it.

Worth mentioning that the cover of the second disc was originally printed with the photo reversed (making Lennon look like he's playing left handed). This was later corrected, as shown above. No idea how many were sold before the correction.