Macca at the White House 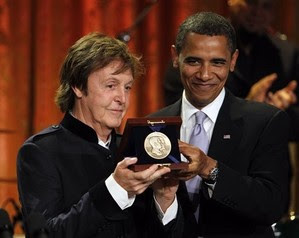 Paul McCartney was in the East Room at the White House last night to receive the Library of Congress Gershwin Prize for Popular Song. President Obama and the first lady hosted the event, which also featured other artists participating in a concert. Jerry Seinfeld did a stand up comedy routine. He had lots of compliments for McCartney and one complaint — he couldn’t quite figure some of McCartney’s lyrics.
Such as: "She was just 17. You know what I mean." Seinfeld: "I’m not sure I do know what you mean, Sir Paul. I think I know what you mean. And I think there’s a law enforcement agency in a couple of states that might want to ask you a few questions."
Of course, the "you know what I mean" lyric was contributed by John Lennon. McCartney's original lyric read "never been a beauty queen".

The concert and award speeches were taped by PBS and will be televised as a 90 minute TV special on July 28th.

I watched this and loved it!