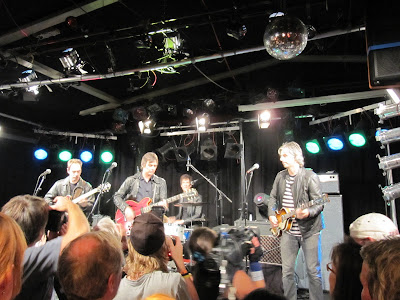 I had the pleasure of being present at the Indra Club in Hamburg for the 50th anniversary of the Beatles' first concert there. The band "Bambi Kino" had the honour of trying to recreate a typical Beatles gig from the Hamburg days.
They did a great job and had lots of energy on stage despite the damp and sweaty environment. All the guys played well and had great voices. Here's some of the songs they played:
Some Other Guy
Lend Me Your Comb
I'm Talking About You
Soldier of Love
Bad Boy
To Know Her Is to Love Her
Red Sails in the Sunset
Boys
Cry for a Shadow
Nothin Shakin' but the Leaves on the Trees
The Sheik of Araby
Lonesome Tears in My Eyes
Bésame Mucho
Mr. Moonlight
Anna (Go To Him)
Falling in Love Again
A Shot of Rhythm and Blues
Ask Me Why
Slow Down
Kansas City/Hey Hey Hey Hey
Everybody's Trying to Be My Baby
So How Come (No One Loves Me)
Sure to Fall (In Love with You)
Ain't She Sweet
'Till There Was You
Shakin' All Over
Memphis, Tennessee
Take Good Care of My Baby
A Taste of Honey
Ramrod
Money
Matchbox
Chains
Shimmy Like Kate
I Saw Her Standing There
3.30 Blues
Keep Your Hands Off My Baby
Honey Don't
Long Tall Sally

They also did "Rock'n'Roll Music", backing the ukulele playing Stefanie Hempel. Horst Fascher was going to reprise his "Hallelujah I Love Her So", but chickened out. He was replaced by someone called Dirk who gave a good interpretation of the song.
Posted by wogew at Thursday, August 19, 2010

Great setlist!!
Anyone have recorded this show?

It will be televised by German channel "Arte" August 29th.

Thanks Roger!
One more great moment was when they played "Leave My Kitten Alone"! Great night! Marius

Ah, I've been wondering about their setlists. This is great. Thanks!

Been there, too. What a night. Thanks very much for the setlist! But didn't they end the show with a second version of "Some Other Guy"? I remember that clearly. And can you say exactly when "Rock'n'Roll Music" and "Hallelujah I Love Her So" were played?
Here you can read more about Bambi Kino's Hamburg radio gig from August 16, broadcast on August 17: http://ivorymusic.blogspot.com/2010/08/bambi-kino-live-at-ndr-radio-903.html

I'm afraid I didn't take notes during the concert, and this list has been compiled later on. I think this concert was broadcast by "Arte" yesterday, so a more correct set list may be forthcoming..