The Beatles in Abergavenny 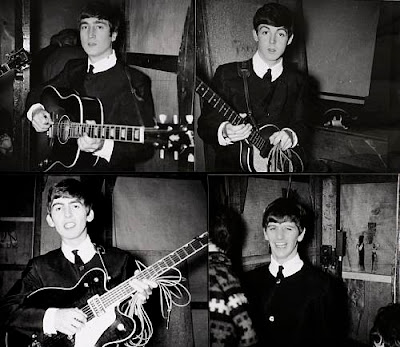 (Wales Online) They arrived with their mop tops and suits followed by hordes of screaming teenage girls who accompanied them everywhere. When The Beatles came to Abergavenny on June 22, 1963, it was a moment that put the South Wales market town on the map. Though still rising stars of the ’60s music scene rather than the global pop phenomenon they would become, Abergavenny had never seen anything like it, with John Lennon arriving at the gig in a specially chartered helicopter. Now images from the town hall gig, thought to be previously unpublished, are to go up for auction at Bonhams.

Just two years later when Beatlemania gripped the US the Fab Four would be performing before a record-breaking 55,000 at New York’s Shea Stadium. But it was in more modest and intimate settings like Abergavenny that the band built the reputation that would see them conquer the world. Bonhams Beatles’ memorabilia specialist Stephen Maycock said the images had been lying in a drawer at the home of the seller for the past 47 years.
Mr Maycock said: “Obviously The Beatles were photographed every day of their lives wherever they went and whatever they were doing so these things do still keep emerging
“But I wouldn’t say there are a lot of them by now. We’ve probably seen most of the pictures that were taken, but not all.”

The band hit the stage at the town hall later than normal as Lennon was recording an episode of Jukebox Jury at the BBC, in London, and filming didn’t finish until 9.15pm. He was immediately taken to Battersea Helipad, from where he caught a helicopter to the Penypound football ground, in a frantic race across the skies of London and South Wales. His band mates had made the journey by road and were given a civic reception hosted by the mayor and mayoress.
In April 1963 The Beatles’ manager Brian Epstein had signed a contract with Abergavenny promoter Eddie Tattersall, for the group to perform. By the time the event took place, the group were commanding fees of twice the £250 – worth about £3,500 now – they were paid, but agreed to honour the booking.
The helicopter itself cost Epstein more than £100 – over a third of the band’s fee for the gig.
The Beatles’ support act was a local group, The Fortunes, who were paid £18.90 – the equivalent of around £270 now.
The group finally took to the stage at 10.30pm, with 600 fans watching the performance, each having paid 12/6d for a ticket.
Their set lasted over an hour, and included much of the band’s debut album Please, Please Me.
Local performer Bryn Yemm, who was one of those who saw The Beatles’ performance at the town hall, said the band’s music was as integral to their early success as their army of female fans. Mr Yemm, who is now based in Florida, in the US, said: “I spent most of the night with the boys in the dressing room, which was the mayor’s parlour, waiting for Lennon to come down from Jukebox Jury, in London.”

The singer, who still owns a signed copy of the album Please, Please Me from the gig, added: “The crowds all came down to the front of the stage and me and Paul McCartney attempted to go upstairs to take in the buzz of the room, but it was too crazy and he decided to turn back to the dressing room after reaching only half-way.”
Steven Howard, who plays Paul in tribute act The Mersey Beatles, said the band honoured many smaller gigs such as that at Abergavenny after Please, Please Me became a number one single in early 1963. Their performances helped the group build up a fan base and hone their craft, he said.

Mr Howard, 38, said: “Those smaller venues also helped them get tight as a band – particularly the trips to Hamburg playing 12 hours a day virtually non-stop. “But then coming back and playing to their home audiences helped as well, because they came back more confident and a better band.”

The images, expected to fetch up to £2,500, include the band backstage, meeting local dignitaries and Lennon arriving by helicopter. They include the original negatives and 12 corresponding prints and are being sold with the copyright.

The images go on sale in the Bonhams auction Pioneers of Popular Culture in the Vintage at Goodwood Festival on Sunday, August 15. This is the same auction which features the Challen upright piano originally from Studio Three, Abbey Road Studios, used by The Beatles and others.
Posted by wogew at Wednesday, August 04, 2010