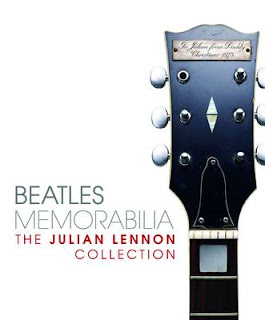 An archive of Beatles memorabilia including lyrics, clothes, guitars and letters will be unveiled this autumn in a book Carlton is publishing with John Lennon’s son Julian.

Beatles Memorabilia: The Julian Lennon Collection will be published on September 19th in hardback, priced £25 (Available from Amazon (UK) at half that price). It is written by Brian Southall, who worked with The Beatles during his time at their record company EMI.

Editor Roland Hall said the publisher has secured a serial deal with a national newspaper so he could not reveal specifics about the items included in the book. But he added: "Suffice to say there are items in the collection that nobody has ever seen before. Some were handed down by John himself, some came from Julian’s mother Cynthia, some were purchased by Julian at auction and some were gifts from others—such as May Pang and Paul McCartney. There has never been a collection like this in print before."

About Brian Southall: His first book – the official history of Abbey Road Studios – was published in 1982 and since then he has written The A–Z of Record Labels; The Sex Pistols 90 Days at EMI, Northern Songs: The Story of the Beatles Music Publishing; If You Don’t Know Me By Now: The Authorized Story of Simply Red; Pop Goes to Court; and most recently The Rise & Fall of EMI.
Some items from Julian's collection are on display at the White Feather Exhibition at the Mersey Ferries terminal building in Liverpool. The exhibition is open until 31st December 2010.
Posted by wogew at Sunday, September 12, 2010