Lennon and McCartney in 1974 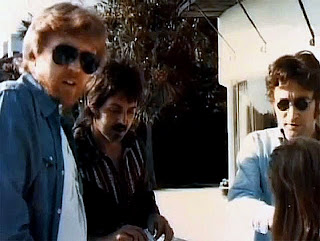 A new photo of Lennon and McCartney in 1974 emerged on the excellent Beatles photo blog today. Also in this photo is Harry Nilsson and probably Linda McCartney's hair. The McCartneys visited Lennon when he was living in Los Angeles with May Pang. McCartney later claimed (in the book Many Years From Now by Barry Miles) that he was involved in bringing Lennon back together with Ono. This is the third photo of Lennon and McCartney together after the Beatles, all were taken in LA in 1974. The first one was a bad black and white photo in "Moon the Loon: The Amazing Rock and Roll Life of Keith Moon" from 1981 by Dougal Butler, the second was published two years ago in May Pang's photo book "Instamatic Karma". Harry Nilsson is well known for his Beatles connections, and there's a new documentary on him coming to DVD shortly. This third photo is from that documentary, and all three photos seems to have been taken on the same occasion, in the scorching sunlight on the terrace of John Lennon and May Pang's rented house in Malibu. Ringo Starr was also living there at the time, but he wasn't in when the Macs visited, otherwise we would probably have had three Beatles in one snapshot.

It is from the documentary. The picture was found in a box of Harry's stuff apparently.

I saw an advance of the Nilsson doc and this is in a photo montage. It certainly stood out. Very cool.

Hey, where can I find the link for RB Decrypted"? ;)

hey, what about this pic:

it looks like paul is wearing the same clothes.. so, was ringo there with paul and john?