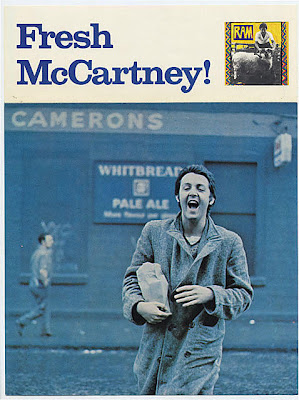 HP and McCartney Productions Limited (MPL) today announced an agreement to digitize and deliver the library of legendary musician Paul McCartney via a private cloud.

McCartney has one of the most comprehensive libraries of any artist, much of which has never been viewed before. His library includes images, artwork, paintings, film and videos, as well as masters of some of the most popular songs ever written.

Under the agreement, HP will work closely with MPL to digitize the material and design and build a state-of-the-art content management system. McCartney’s library will then be delivered through a private cloud environment. Portions of the library will be made available to fans so they can have a personal and unparalleled glimpse into McCartney’s work. Some bits of the library will be made available, whereas other sections will be private.
The content management system will let McCartney decide how much of the collection he ultimately wants to share. Once the content becomes accessible, McCartney will likely end up with a hybrid private-public cloud system that can accommodate spikes in traffic.
The collection includes some items that have not been seen before by the public. For instance, McCartney had cameras follow him while he attended events such as Live Aid, and that footage has not previously been released.

"I’ve always been interested in creative ideas and new ways of reaching people, so this is a really exciting initiative for me," said McCartney. "I hope it will allow people who might be interested to access parts of our archives they might otherwise not be able to. I’m looking forward to working with HP on this project."

The agreement marks the first time that HP has collaborated with an artist in this way. In addition to changing how fans and artists will interact, the digitization of McCartney’s library will help preserve the history of one of the world’s most loved artists for future generations. Between 30 and 100 HP employees will work on the project.

"Paul McCartney has always been a trendsetter in the music industry and HP has been at the forefront of technology innovation," said Tom Hogan, executive vice president, Sales, Marketing and Strategy, Enterprise Business, HP. "We are proud that he turned to HP as a trusted partner to help him preserve his legacy and set a new vision for the industry."

WogBlog is hoping that stuff like the Bruce McMouse Show will be included in the 'open' section of the library. We expect a new edition of Stuart Bell's irregular column "For whom the Bell tells" to tell us more.
Official HP press release
Posted by wogew at Wednesday, September 22, 2010