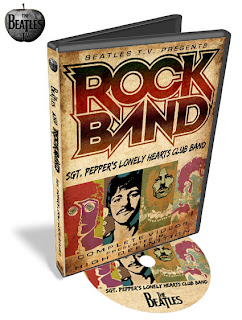 Beatles bootleg DVD collectors are having a swell time these days. Not only did The Beatles and Apple "let loose" the Washington DC 1964 concert film, the Unsurpassed Promos have started to appear and Misterclaudel released all the outtakes from "The Beatles Come To Town", but the "Magical Mystery Tour Revisited" DVD set has been announced to start to appear next week. There's also an all new series, "The Full RockBand Series Videos - in HD", and volume 1, "Sgt Pepper's Lonely Hearts Club Band" is already out. The download package contains a 16:9 NTSC DVD in much improved picture quality, artwork and disc artwork, a folder with a video in MP4 and 720p resolution, and a bonus Sgt. Pepper documentary. So now you can sit back and enjoy the RockBand cartoon Beatles perform the entire album in great audio and video quality, without interruptive gameplay graphics. The series goes on with Rubber Soul and Abbey Road, and eventually the rest of the Beatles:RockBand tracks. This series is released by the new "Beatles TV" enterprise, which was also behind a few of the Washington concert DVD's that popped up last week and during the weekend.
Posted by wogew at Sunday, November 21, 2010

Where will we be able to find this!? I have the game and play it often still but have never really seen the videos! I'm waiting for this for sure:)