Spirits were high and the party mood right in the audience at Ringo and his All Starr Band's concert at the muddy Norwegian Wood festival in Oslo, Norway yesterday. Ringo himself was in a good mood and surprisingly fit for his age. Unfortunately the concert was shortened since the day before in Gothenburg, and twice as unfortunate - they were all Ringo songs: "Act Naturally", "The Other Side of Liverpool" and "Peace Dream". 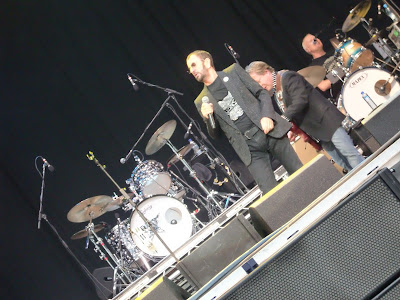 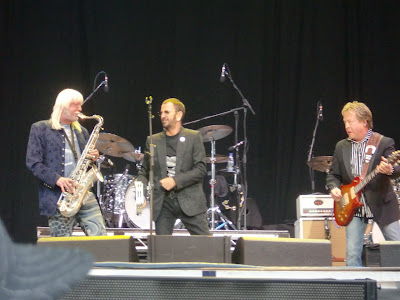 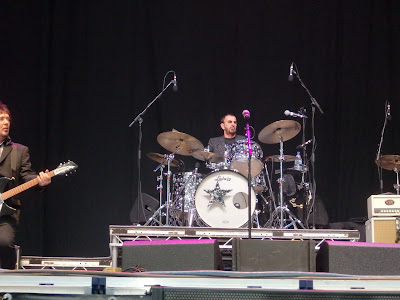 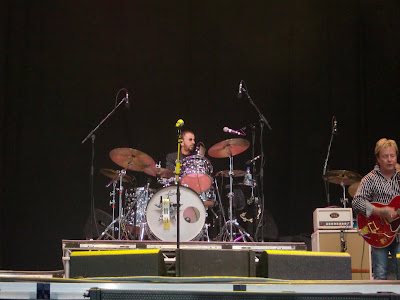 During the finale, "With A Little Help/Give Peace A Chance" Little Steven from the E Street Band and The Eels also appeared on stage. The song "Norwegian Wood" was not played, but Ringo quoted the song's first two lines, and the riff was played occasionally
Posted by wogew at Sunday, June 12, 2011

Great pic- congrats on being in the position to get it with Ringo!

NIce pics! Is a pity for "Norwegian Wood".
When Paul will back in Oslo we must send to him an offical request to play "Norwegian Wood" like Ukrain people with Mrs Vandebilt ;-)

Great Norway got Ringo that year! It was your first All-Starr Band concert?

Finally I had seen him too (I missed his shows in Russia in 1998 and still can't forgive myself for that). Sadly the security was too strict and I can't prove it (your pics are great, btw) :-D

Pity about shortening set, I was impress with "The Other Side Of Liverpool" and "Peace Dream" ("Act Naturally" was performed weakly that time, without the energy).

Hope the recording will appear any soon, would love to listen those two lines of "Norwegian Wood".

This was my third All Starr Band to experience, I travelled to Gothenburg, Sweden in 1992 and to Skanderborg, Denmark in 1998. Plus I've seen Ringo twice since, at the Concert for George in 2002 (there's a glimpse of me in the background during "Photograph" and in Liverpool in 2008. And I'm also going to see him this coming Saturday at the Liverpool Empire, where I'm sure he'll at least include "The Other Side of Liverpool". His "Norwegian Wood" quote appears at the end of this video.

Hi Roger! How was the brand shop? Are there any posters, tour book, t-shirts available during the European tour?