The relocation of the Abbey Road zebra crossing 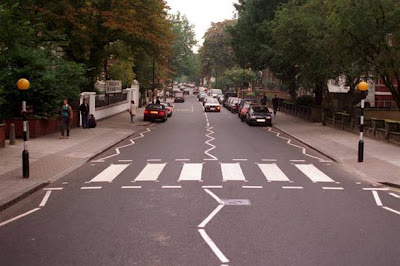 Or the relocation that never happened. According to this BBC news report from December 2010, "The original zebra crossing, where the photograph was taken, was moved several metres for traffic management reasons more than 30 years ago, and no original features remain."
"A spokesman for Westminster City Council said: "The detail of exactly when and why the crossing was moved from its original location have been lost in the annals of time."
"But by comparing photographs with the Ordnance Survey maps, we believe that the crossing might have been further north nearer 3 Abbey Road, which was the front house of the EMI Studios, because the steps of Neville Court appear to the right of the crossing in original photographs of the crossing, whereas the present crossing is near the junction of Abbey Road and Grove End Road."

I beg to differ.

So it's clearly just a remark from a non-obsessive person who has seen too few photos from the day misinterpreting the differences in perspective.
Anyway, it's a good opportunity for me to post a few more Abbey Road photos! And you can see that the various perspectives can fool the non-obsessive eye...

I remember reading an article in 1984 in The Observer magazine about Carol Bedford (Apple Scruff), and her book, which said the zebra crossing had been repainted further down the road. Maybe this unspeakable lie originated then? I also remember Carol said she didn't listen to The Beatles anymore, but Bob Dylan, whoever he is.

I created a webpage on this very topic myself a couple of years ago, with plenty of photographic proof that it hasn't moved. Here it is!

I was eventually able to convince the "higher ups" of the Wikipedia to remove the "fact" of the crossing's relocation from the Abbey Road page. Difficult to do, when it's your word against the BBC's!

My attempts though to get Westminster City Council to retract their statement went unanswered.

When I visited the site in June 1995, there were 2 crossings. The normal one, and one slightly further back a couple of hundred yards or so, on the other side of a junction. The cab driver who dropped us off, said the when the Council installed the new one, people got wind that they were planning on removing the Abbey Road one and kicked up a fuss so they left them both. No idea if the other crossing is still there but this might explain some of the stories.

I was there a few years back on my bike and I went further down the road where the other crossing is and there were a load of Japanese people having their pics taken walking across it! I had to tell them it was the wrong one, can you imagine travelling halfway around the world only to have the wrong pics!

The photo 'before those annoying zig-zag lines" is a bit of a mystery.

Zebra crossings were given zig-zags either side in 1971. Photos of the Abbey Road crossing taken after this date show its zig-zags - they're clearly visible in the 1990 shot of Mrs Thatcher on the crossing.

The mystery photo without the zig-zags was taken some time after 2001 - that was the year the BMW MINI approaching the crossing was introduced.

It might be possible to narrow the date of the photo down some more if the cars' number plates were legible, but without those extra clues, 'early 2000s' is a good ball-park date for the pic.

It was obviously not taken before the zig-zags were added, but at least 30 years after.

So where are the zig-zags? Were they temporarily removed at some point (perhaps for filming)? Or have they been photoshopped out of the picture?

There's no visible evidence for either, so whoever did the removal job (whether virtually or in real life) did a good job!

Could have been removed for a filming or perhaps the Beetle Campaign?

Either that's photoshop, or the painters have been very careful when scorching the paint away (marks that are usually present for months if not years after). The road hasn't been retarmaced as there's cracks that are seen in several of the pics. Curious, but I think there's a computer involved here :)

Have a look at The Rutles 1978 parody of the original cover. It had clearly been moved and has since been moved back to its original position.

Actually I take it back. I discovered a wide shot of the Rutles parody and it clearly hasn't been moved. I was fooled by the perspective.

Roger, on the Abbey Road Studios Facebook site, I gave someone your name and blog and suggested they check it out (someone who believed the crossing had been moved). I don't know when the zig-zag lines were added, but I thought I saw a picture from the Rutles movie with the zig-zag lines.

Actually, pictures lie all the time. They even did so before Photoshop.

"Bob Dylan, whoever he is."

I was pictured crossing the zebra on 30th October 1971, I walked on the exact crossing that appears on The Beatles' Abbey Road album cover (just where John Lennon and Ringo Starr were).....complete with the black indent on the third from right white stripe. There's even the original lamp post (no.25), complete with the remnants of a large black mark, and Belisha beacon, both of which have long since been replaced. In those days people rarely visited the site. I still have the picture should you wish to see it.