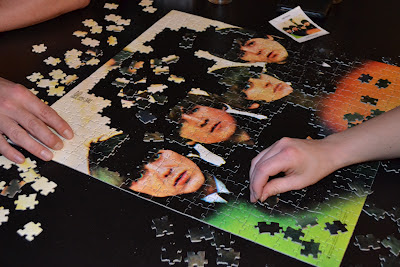 The vinyl editions of the remastered Beatles catalogue seems to have been confirmed, courtesy of the listings of upcoming releases on the site of EMI Music, Czech Republic.

We have also heard that there were a few problems that needed to be addressed to puzzle the releases together, which delayed the project:

- EMI wanted the vinyl albums to be upscaled versions of the stereo CD digipacks, whereas The Beatles/Apple (I'm referring to them this way, so as not to confuse them with Steve Jobs/Apple) wanted to replicate as closely as possible the original releases, including specific inner sleeves, labels and other markings. And we're told The Beatles/Apple got it their way. Though our guess is that the original Let It Be boxed set is, once again, not regarded as the version to replicate. And they are likely to follow the correct, eighties versions of the With The Beatles and Beatles For Sale covers. On the sixties pressings of Beatles For Sale, the final song on the album is identified as "Kansas City (Leiber - Stoller)". This credit was the same throughout the sixties and the seventies. In the early eighties however, it was discovered that the Beatles actually perform a medley of two songs on this track, "Kansas City/Hey Hey Hey Hey". On all later pressings of the LP and on all CD's this has been corrected, and "Little Richard" Penniman's name has been added to the composer credits. Along the same lines, when the song "Please Mister Postman" was first listed on the LP With The Beatles in 1963, the songwriting credits read: "Please Mister Postman (Holland)". Starting with the 1987 repressing, the credits were amended to: "Please Mister Postman (Dobbin-Garrett-Garma-Brianbert)".

- Then of course, pressing time for the 14 titles, 16 LP's in sufficient quantities was another problem. No pressing plant could commit to this quantity in the timeline specified. It's possible they overcame this simply by starting the pressing 'on the quiet' while further delaying the releases one full year.
Posted by wogew at Wednesday, August 22, 2012

With the release of Magical Mystery Tour in vinyl, I thought the complete catalog reissue was just one step, and as far as can be read in this nota, one of the problems is that there no a factory that can pressing all the material at a specific time. Then I wonder how did The Rolling Stones to edit not one, but two box sets with all his catalog?