As I'm sure you now, The Beatles/Apple released CD versions of the USA albums in 2004 and 2006 in the boxed sets "The Capitol albums" Volume 1 and 2. The CDs were not available individually, and the series stopped after "Rubber Soul".


In new listings on Amazon, it now looks like they are releasing the USA albums individually on CD in connection with the 50th anniversary of the Beatles' breakthrough in the USA, and the titles that weren't  released before are now making their CD debuts. 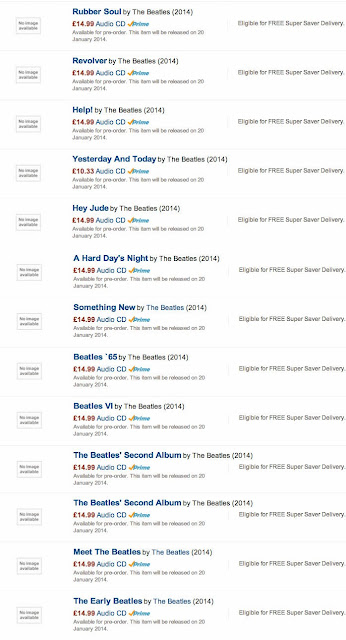 The albums are listed on Amazon in the UK and Japan and so far not the USA Amazon site. Of course, since "Yesterday and Today" has made the list, people are wondering if it will come with a "butcher" cover design. Still no Beatles' Story album, though.


Here are the individual album listings from the UK Amazon site, all supposedly due for release on January 20, 2014:

I think they should release yesterday and today with a removable sticker of the trunk cover on top of the butcher photo.

The question is, will it be on EMI? As Universal Music is now the owner of EMI ("On Air - Live At The BBC Volume 2" was the first record to be marketed by the new owner!) , I'm asuming they will be released on Apple by UNIVERSAL MUSIC. @ Caveman: A brilliant idea! ;-)

Universal bought Capitol, so they may as well use that.

links are not working anymore