The "Mystery man" on the Abbey Road cover

This is an update about a mystery that we have previously covered. The update was made because we got hold of some Abbey Road photos that were in a higher resolution than earlier, which enabled us to take a closer look at the person in question. 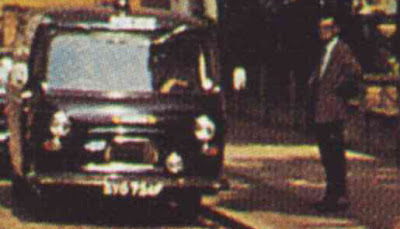 In February 2008, news was that Florida resident Paul Cole, by the media identified as the man beside the police van on the famous Abbey Road cover photo of The Beatles, had died, aged 93. But was he really that man? We don't think so, and here's why.

According to a couple of interviews he gave in 2004, Paul Cole was on the pavement while he was waiting for his wife, who was visiting a museum in Abbey Road. He was starting a conversation with the driver of the police van, and a bit later he realized that the police was there for a special occasion. When he looked over at the Beatles, he only recognized them as "A bunch of kooks, I called them, because they were rather radical-looking at that time. You didn't walk around in London barefoot".

I think Paul Cole was telling tales, his story seems to indicate that he has only seen the one photo that most people have seen, the actual Abbey Road cover. There's no museum in that part of Abbey Road. The police van was a late arrival to the photo session, as evidenced by the previous photos, so Paul Cole can't have had such a conversation with the driver prior to the Beatles arriving at the scene. And the "mystery man" can be seen in several photos. Paul Cole was just someone who knew three things about the cover:

So, he invented a story, putting himself in the picture. Well at least he got a laugh when news media all over the world reported about it. It's even in the Wikipedia entry of the album. There were six different photos taken of the Beatles crossing Abbey Road:

You can look closer at all these photos in our "The Road Goes On Forever" piece.

This is a reenactment from the recent The Beatles RockBand commercial, the scene seen from the "mystery man's" point of view.

Clearly looking straight at The Beatles before the police van had turned up, here's a close-up of the "mystery man" as early as photo 1, when Paul McCartney still had his sandals on:

Earlier references to the "Mystery man"

Over the years there are several people who have claimed to be the man on the Abbey Road cover. I have heard stories about people claiming to be or to know "the man on the cover" for as long as I have been a Beatles fan. One of them supposedly was a gay man who died in the seventies. Here's another, earlier claim:

Jo Poole: "At 21, I was a dedicated Beatles fan, and bought the 'Abbey Road' album the moment it was released. As soon as I saw the cover, I shouted, 'That's my brother, Tony.' He was 33, and was very distinctive at six feet four inches tall. Tony Staples was his name and he lived in Scott Ellis Gardens, near Abbey Road, and regularly saw the occasional Beatle, though catching a glimpse of all four Beatles together was rare, even in Abbey Road. He was on his way to work as an administrative secretary for the National Farmers Union on the Friday morning when that photo was taken. I used to travel regularly from my home in Gloucestershire to visit Tony in St. John's Wood, and I remember him pointing out Paul McCartney's house."

Of course, since Paul Cole was the first of the "mystery man" candidates who managed to get in the news during the internet age (2004), and because he was referred to as "the man on the Abbey Road cover" in an obituary that was widespread all over the internet (2008), AND because the job of research has been abandoned along with the proof reading job by the media at large, it has become almost impossible to google and find all those other, previous claims (from the pre-internet seventies) about the identity of the man. In 2004 and 2008, a news item such as this could "go viral". In the seventies, it would have been published in a small, amateur Beatles fanzine and read by the die-hard subscribers only.

This post is part of the all-encompassing article about the Abbey Road photo cover session, which you can find here.

Of course, I love this. It's got a resonance of 'Zapruder Study' with our 'mystery man' corresponding to 'Umbrella Man' and no doubt it plays some part in scaring the bejesus out of Paul Is Dead initiates :P

But there's a certain undefinable artform with this kind of annotation field that still doesn't yet have a name but is deeply compelling.

Now there is doubt that Paul cole maybe is not the man immortalized on the beatles album Abbey Road. It seems people will have to do their own research and make up their own minds. It seems unless there is concrete evidence that guy standing alone on the pavement close to that black police van, will remain the mystery man.