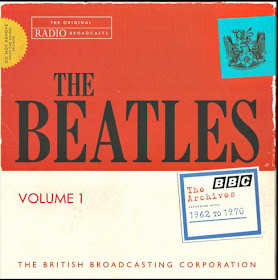 Starting to circulate among collectors is a new, free 24 disc set of Beatles material from BBC Radio. The set is designed to accompany Kevin Howlett's book The Beatles: The BBC Archives 1962-1970. Each disc can be stored in a separate case, or they can be placed in slim cases and housed in the box intended for the book. They will fit in the UK box, not in the US one, because that box was a bit smaller.
The set includes every known surviving BBC radio music and interview appearance from 1962-1970, plus guest appearances by other acts, and (as bonus items) interviews with those involved in the sessions.

The sessions are arranged chronologically, with several Special Editions including the complete 5th birthday Saturday Club, The Beatles Abroad, all of the group's appearances on the Top Of The Pops radio series up to 1970, the BBC Beatles Night in December 1963, and even a DVD of their surviving BBC TV appearances.

All tracks have been pulled from the best possible sources including original transcription discs and tapes. Dropouts, mains hum and other annoyances have been carefully removed. Noise reduction has not been used, however it is present on some of the tracks, because noise reduction was used on the releases they are sourced from. Early fades have all been fixed where possible. This has been a huge undertaking, and I am sure the people behind it have spent years of research and audio enhancement work to accomplish such a comprehensive set. These are probably the dedicated and knowledgable fans who should have been trusted to master the Beatles' own official BBC recordings albums... A number of upgrades are included, plus some previously unheard guest appearances. And as a special bonus, a selection of never before heard continuity from the Light Program and Home Service is included, giving a bird's eye view into the hilariously stuffy state of British radio in the early 1960s.

The makers of this amazing collection are not doing it for profit, but because they feel all of The Beatles BBC material should be out there for fans to enjoy and historians to scrutinise. In fact, the set is distributed as free download links, and the people behind it are is are encouraging the fans to continue to distribute this set freely before it gets picked up and distributed for profit by the real bootleggers. They are also encouraging everyone to buy Kevin Howlett's book, not only to get the box to house the collection, but also because it's a vital piece of the BBC puzzle and will enable everyone to put the audio discs into context.  They are also asking people to support the artist and buy the official BBC albums. As they say: This is a fan project, not a bootleg. Don't charge money for copies.

If you have any of the previous releases of the material, like the one from Purple Chick (an earlier non-profit Beatles BBC project), this is a huge update, both regarding upgrades of songs, chat, intros and outtros as well as newly unearthed material. And if you have managed to get hold of the 2010 "Unsurpassed Broadcasts" series, this one surpasses it, both in volume and because it contains material that has been found since then. The set covers the same period that Howlett's book covers, so it goes all the way to 1970, whereas older BBC sets come to a halt after The Beatles' final original music performances in 1965. Doug Sulpy calls this set "core" in his latest issue of The 910, in fact he even hints that it may be too comprehensive! The one thing is, if you want discs, you have to burn them yourself, and the same goes for the artwork, you'll have to print it out.

You won't get this set from my blog, but look around the neighbourhood blogs, and I'm sure you'll stumble over it somewhere.
wogew at Tuesday, January 27, 2015
Share