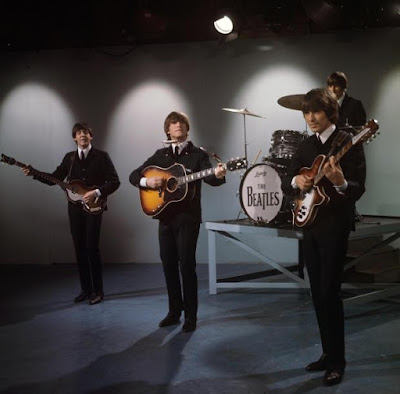 “Love Me Do” – This is the take with Andy White on drums and Ringo on tambourine. It is the same mix that we hear on the British Please Please Me album and is the mix that was released as an American single. Therefore, it is the “hit” version of the song. This version sounds like the 2009 remaster, but there is a slight difference. This mix has a slightly longer fade; we hear about half a second more than we do on PPM.

“From Me to You” – The song disappoints me by being the mono mix. The original tapes exist, so it would have been possible to compile a stereo mix that included the harmonica intro, but they didn’t do it. With so many songs being remixed just for the heck of it, I had hoped that the one song that could use a remixing would have been remixed from scratch.

“She Loves You” – The mono mix is the tape extant. The edits are quite clean here, but it sounds like parts of the song have been re‐EQ’d in order to make the track’s eight edits less noticeable. I prefer the original mix unaltered.

“I Want to Hold Your Hand” – The mix is almost identical to the remaster, but the hand claps sound quieter. The remaster also had a little echo on the vocals, and that’s absent here. The vocals sound more clear and distinct in the second chorus, too. Could be the same mix with a bit of sonic tweaking.

“Can’t Buy Me Love” – The vocals on this mix are spread out across the stereo image with the drumming in the center, and the main guitar overdub at right. The percussion is somewhat muted at the top end, but the original stereo mix (1964) also had the top end muted.

“A Hard Day’s Night” – The bongos are mixed further back, the vocals are spread out, and the guitars at the left are louder. So, while the arrangement is similar to the 1964, this is definitely a new mix.

All 27 tracks from the CD is analysed in a similar way, and from the Beatles 1+ disc, the new stereo mixes of “Strawberry Fields Forever”, “A Day in the Life”, “Hey Bulldog”, “Come Together”, “Free as a Bird” and “Real Love”.

To read all these reviews, we direct you to his pdf file.
Posted by wogew at Monday, December 21, 2015

I Think some of the tracks sounds much better then the 2009 remixes
Let Giles Martin remix all Beatles records.

it's funny how the cd has the andy white version of love me do,yet the dvd or bluray video for love me do uses the ringo version.also i'm glad from me to you doesn't use the harmonica intro,i prefer the intro without it.

I disagree with the analysis of the tracks on 1+
If you hear with headphones it is clear that all stereo tracks are remixed.
All instruments and voices sound cleaner and separate of each other. You just can't get that by simply remastering.
The analysis focuses in where the instruments are located, but I can locate the instruments in exactly the same place in a new stereo mix, and still it is a new mix.
Doesn't mention that now you can hear the piano syncopation on Penny Lane that was almost inaudible before.
The only two tracks that couldn't be remixed were Love Me Do and She Loves You because there are no multitracks from where do the remixing. Unles you do some kind of spectral processing that would have been mentioned, and was not.
In the Steve Hoffman Forums the man himself explained the technique used in this kind of "new school" mixes, despite the fact that they could have been made with "old school" equipment.

While I really do like the brightness and clarity of these mixes compared with the 2009 mastering. But for someone like me who listens actually to the 5.1 channels I don't like how the vocals are on all the channels. If you listen to the Help DVD 5.1 the instruments were nicely spread across the different channels. However Giles who did the AHDN Blu Ray and now this tends to put the vocals up center and on the front channels drowning out the instruments. Would have been nice to have an isolated Paul Piano and his vocals on one channel of Hey Jude, but instead it's all muddled together on all channels.

Unfortunately Jeff Ammonski, the audio of the Hey Jude lips on "1+" are straight from the TV audio, wherein Paul sung live over the top of an instrumental / part vocal track. As this video soundtrack only existed in mono, the 5.1 has been 'shaped' from this mono as a basis. Either way - I must say - considering they added a second Hey Jude with original audio to 1+ anyway - this was a chance to use all the "Hey Jude" video takes, and create / edit the perfect video clip that was synchronized to the original studio recording. I mean - this was a chance to have the first 5.1 mix of Hey Jude ever - and with pictures - arguably the Beatles biggest hit - but no...

There is no stereo "Me To You" with harmonica and vocal intro
The mono was created by playing both the vocal intro mix and Harmonica only intro mix in at the same time by starting the two tape machines together.
Hence the phasing on the drum fill.
see " Recording the beatles' book.
I think, to avoid guess work as to a remixers motives, a background knowledge of the technicalities involved is helpful.

Strange comparisons in the article. Me too disagree with the analysis.
1 2015 (album) is a new mix (except for Love me Do and She loves you). Giles took the mono masters as a reference. He did a very good job. Just like they did with the Yellow Submarine Songtrack. Especially the brightness and clarity of these mixes compared with the 2009 remasters. Wish they give the 2009 stereo masters the same treatment. I never listen to 5.1. mixes by the way. Hey Jude still sounds strange, compared (burried instruments) to the Love version. Listen tot the wonderful bass line on the Love version.
Concerning the Blue Ray: the new mixes of Free as a bird and Real Love are amazing. They did a wonderful job. Better versions than the Anthology versions.

Who said the guy from Grapefruit said 'F***ing Hell!' on 'Hey Jude?'
According to Geoff Emerick, John Lennon said that Paul McCartney had
'hit a clunker on the piano and said a naughty word.'

'Hey Jude' also fades out too quickly. Where is the fancy bass run right at the end?

Yes - correct about Hey Jude on the CD finishing too soon. Amazing, considering the LOVE remix took that bass line, and used it throughout. None of the Hey Jude mixes (since the original) have ever hit the bass 'thump' of the drum fill entry like the original stereo - not the LOVE or the new 1 mix. I'll stick with the original Hey Jude mix thanks...It's always been a good clean mix hi-fi mix...

I agree about the original 'Hey Jude'. A bit like the original mono 'Paperback Writer' and 'Rain' or even the mono version of 'Revolution'. These newer remixed versions do not match the bottom end and firepower of the original 45 single versions.

Sonically, there's a flow to '1' that wasn't there before. It hangs together as an album much better I think.