The Ballad of John and Yoko photo session

On April 14, 1969, Paul McCartney and John Lennon recorded the new Beatles single A-side, "The Ballad of John and Yoko", playing all instruments and singing themselves. George and Ringo weren't available for the recording session and John was eager to get it done. Just a few days later, the four Beatles met up for a photo session to have available for the single cover in foreign markets. In the U.K., photos for single covers weren't the norm - they used factory sleeves. Yoko Ono was with the Beatles on this occasion, since she is both in the title and the lyrics of the song they were to illustrate. We don't have the exact date, but we have the U.S. single cover from this session, with two of the photos. Other photos from this session emerged elsewhere. YouTube user Elena has produced a number of videos with images she has collected over the years and themed. Here is her collection of photos from this photo session:


Recently, a new photo was published from this occasion. It premiered in the current issue of the Mojo music magazine, as part of their article on the new "Abbey Road" release. The photo is taken by Linda McCartney who was along for the session.

The Beatles are seen smiling to their photographer, while Linda snapped her picture from standing to the side of them. It looks as if it's taken just as the front cover of the U.S. "Ballad of John and Yoko" is captured.

An earlier known photo from Linda, taken from the other side is this black and white one: 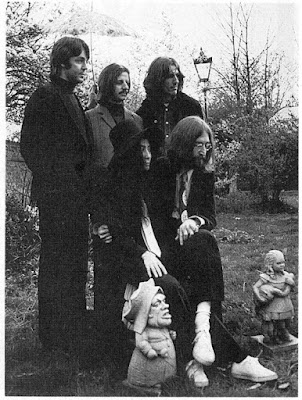 Update: Matt Hurwitz asked Universal about the photographer, who then queried Apple. They say that it was Linda who was the principal photographer and took the front-facing photos we see on the picture sleeve. The side shots, documenting that activity, was likely taken by Mal Evans. Mojo was therefore apparently mistaken in their credit.
Posted by wogew at Friday, August 23, 2019

Sorry, what is your definition of smiling?

Interestingly, the same photo was used for the Israeli picture sleeve of GIVE PEACE A CHANCE. See: https://www.discogs.com/The-Plastic-Ono-Band-Give-Peace-A-Chance-Remember-Love/release/8172243