Chants of India out on vinyl for RSD 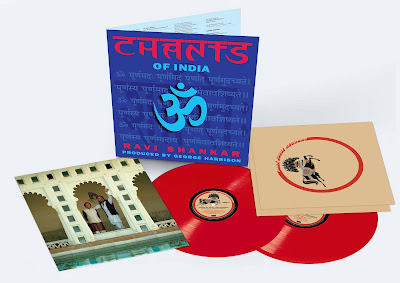 To celebrate Ravi Shankar’s Centennial, Dark Horse Records will release the George Harrison produced 1997 album ‘Chants of India’ on vinyl for the first time for Record Store Day 2020.
The album will be available on 2 x 12” LP 180-Gram Red Vinyl and include an exclusive 12”x12” photo print.

Originally released on CD in 1997 on Angel Records and produced by his friend and sometime collaborator George Harrison, the album consists of Vedic and other Hindu sacred prayers set to music, marking a departure from Shankar's more familiar work in the field of Hindustani classical music. The lyrical themes of the recorded chants are peace and harmony among nature and all creatures. Sessions for the album took place in the Indian city of Madras and at Harrison's home in Henley-on-Thames, Oxfordshire, following his work on The Beatles' Anthology (1995). Anoushka Shankar, John Barham, Bikram Ghosh, Tarun Bhatacharaya and Ronu Majumdar are among the many musicians who contributed to the recording.

In 2010, the album was reissued as part of the Dark Horse Records box set Collaborations, which combined various projects undertaken by the two artists.