No Go for Savile Row 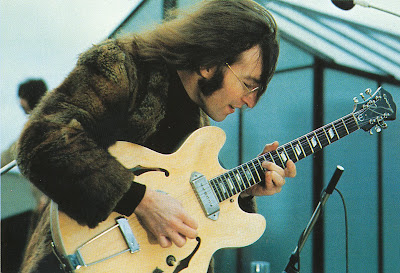 Lennon plays a solo on the roof of Savile Row 3
The Bootleg Beatles has posted this statement on their website, and we are reprinting it here to help spread the word.

No Go for Savile Row!!!
On 30 January 1969 the Beatles walked on to the rooftop on 3 Savile Row and performed live for the last time. For the last 40 years this event has been acknowledged as a landmark event in pop culture.
Well, they say history has a habit of repeating itself.

January 30th, 2009 . 40 years to the day later the band intended to recreate this historic event and pay homage to both it's cultural significance and The Beatles by heading up to the very same roof. This time, however, the performance has been stopped before a note has been played.

The performance itself was to be broadcast live across the nation, enabling millions of fans to enjoy a loving recreation of the original event. But, Westminster had second thoughts. Onerous and extensive demands and conditions were placed upon the band and, with huge disappointment all round, the performance has had to be scrapped.

The BB office did try to persuade Westminster Council to re-issue a licence but sadly local government bureaucracy won the day. In a strange conversation with Simon Pearce of Westminster Council he insisted that the Council were not 'saying no' and that a new licence had to be applied for. When asked if the band could apply for a new licence Mr Pearce said there was not enough time for a licence to be granted. Bizarre!

Mark Cunningham of TPi Magazine sums it up perfectly, "With London 2012 on its way, you'd be forgiven for thinking that this was a fantastic chance to remind the world of a unique moment in music history that happened not in New York, L.A., Paris or Berlin, but in LONDON. Westminster Council, you could have made this happen...you chose not to...you should be ashamed of yourselves."

WogBlog is happy to report that despite the red tape, Beatles fans from Britain, Norway and France are confirmed to gather in the street in front of Savile Row no. 3 on the day anyway, and there are plans to bring a boomblaster to play the rooftop concert from. Join in if you can at 12 o'clock english time!

Links to all the wogblog posts about the Concert at Savile Row Anniversary: