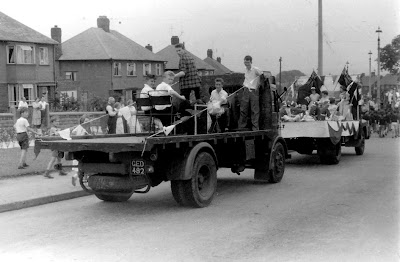 Click to enlarge
The new photo of the Quarrymen from the day John Lennon met Paul McCartney, July 6th, 1957 was recently published, and caused quite a stir in the Beatles fan community. However, a second new photo has gone by almost without anyone noticing. It was taken just a moment after the first one, and shows a larger portion of the surroundings than the previous one. The reason why it seems to have been neglected, is that John Lennon was obscured by another group member in the photo. You can just make out his checkered shirt between the legs of another fan of checkered shirts, Len Garry. It is, however, just as significant as the earlier one. The band has taken notice of Rod Davis' father James taking photos, and are turning their heads, facing the camera. As a bonus we get a glimpse of the truck in front of the Quarrymen truck, carrying the newly elected Sunday school "Rose Queen" Sally Wright and her court. In fact there are about 15 photos of the Rose Queen procession of 1957, but only two of the Quarrymen and on only one of those can you actually see John. It was part of a roll of 35mm film which was sitting in a dusty box on a shelf in a storeroom with thousands of other negatives. 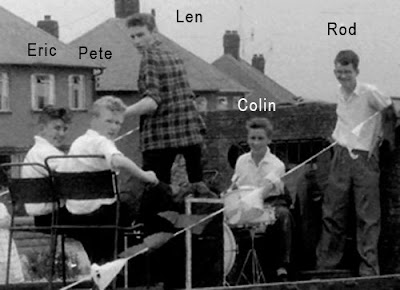