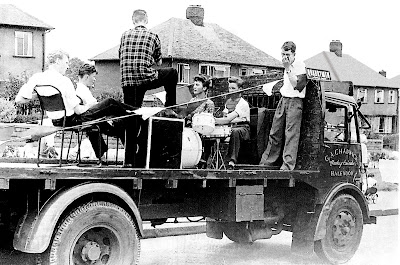 A new photo from the day John Lennon met Paul McCartney, July 6th, 1957, has just been found. The photographer was the father of Rod Davies, a member of John's band, the Quarrymen. As a result of the BBC Inside Out programmes in 2007 and 2008 featuring the Quarrymen and Geoff Rhind’s famous photo of John with the Quarrymen at St Peter’s Church Fete in 1957, Rod Davis was prompted to look once again through the huge collection of black and white negatives and colour slides left to him by his father, James Davis, who was a keen amateur photographer. To his amazement he found a photo of John with the the Quarrymen which had lain undiscovered for the last 52 years! James Davis had himself searched many times through his photo archive to see if he had taken a shot which included John, but had never found one. The photograph was recently published in the Daily Mail. 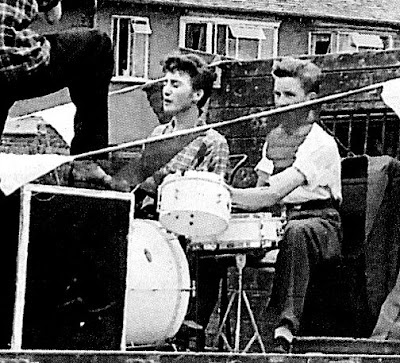 The driver of that truck was Douglas Chadwick, who's family owned the small transportation company and were members of St. Peters Church. They were asked each year to provide the transportation needed for the Rose Queen and parade. Doug does not remember speaking to the Quarrymen that day, other than to advise them to "keep still on the back of the truck and to be sure not to fall off!" 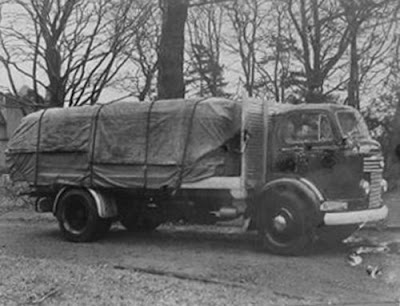 The wood sign with "QUARRYMEN" was painted in red. It was hung from the back of the truck to identify the band during the parade.

After the procession ended near the field behind the church, somebody was saying that John Lennon had a girl with him in the 'Cuckoo Club', which was a small floral garden on the church grounds located near a cuckoo clock, and surrounded by some shrubs which created a private sitting area. Doug and some of his friends snuck up behind the shrubs and spied John sitting with the girl. They all started saying "cuckoo". This caused Lennon to get quite upset and he stormed off angrily. 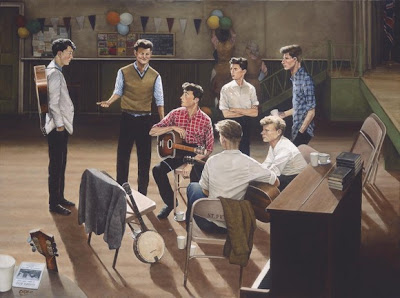 An artists rendition of the first meeting of John and Paul. Eric Cash's painting "The Introduction," which depicts the meeting of John Lennon and Paul McCartney on July 6, 1957, will hang on the wall of the church hall at St. Peter’s in Woolton village, Liverpool, where Lennon and McCartney first met at the annual Garden Fete.

In conjunction with Horst Fascher, founder of Hamburg's celebrated Star-Club, Garrelt Danker Medienproduktion, the German media company, brings music legends of the 50s and 60s back into the limelight - with lots of humour and affection.
"The Quarrymen - The Band that started The Beatles" (65 min) - the first film of the Horst Fascher Star-Club TV series, celebrates its television premiere on June 14, 2009. What better subject for this first episode than the fascinating story of the early days of the most famous music group of all time?

Although The Star-Club was born in Hamburg in 1962 the echoes of its success continue to reverberate worldwide throughout today’s rock and pop music. Under the guidance of Horst Fascher himself, Star-Club TV is the legitimate successor of the original Star-Club and still boasts the original logo.
Featured in the film are interviews with Colin Hanton, Len Garry and Rod Davis, three original members of the "Pre-Beatles" - John Lennon’s 1950s group "The Quarrymen" to which Paul McCartney and George Harrison both belonged.
The film also includes newly discovered photos, which have lain hidden since July 1957, of the “Day John Met Paul” at the St Peter’s Church Fete in Woolton, Liverpool, together with live footage of a modern-day concert by the remaining Quarrymen and the sound of their first new single for over 50 years - "Never stop Rockin’ ‘n’ Rollin’".
For more information about Star-Club TV and dates and times of television showings of "The Quarrymen - The Band that started The Beatles"”, please visit: www.Star-Club-TV.de
First showing of the German language version: Sunday 14 June 2009 at 8 pm on Volksmusik TV.
Recommended reading:

life of the beatles said...

Wow - what an amazing find.