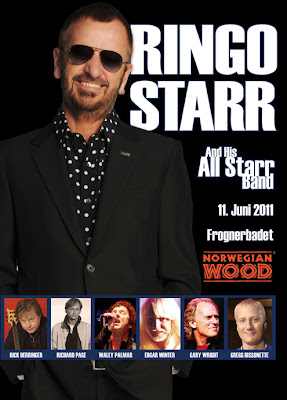 June 11th! We are excited!
Ringo Starr and his All Starr Band will be playing the "Norwegian Wood" festival in Oslo on Saturday, June 11th. Other artists at the festival will be The Eagles and Eric Clapton, among others.
Festival page: www.norwegianwood.no
This is the earliest date of this tour announced so far, and it means that we can look forward to at least around a month of Ringo concerts in Europe.
This will only be Ringo's second visit to Norway, and the first time he is giving a concert. He was here 40 years ago, filming some material for the 1971 Cilla Black TV Special, "Cilla in Scandinavia".
Ringo is also scheduled to play in Denmark in Værket, Randers. That happens the day after Norway. The day before he's playing Gothenburg, Sweden.

Posted by wogew at Wednesday, February 23, 2011 No comments: Links to this post

From the HIWAX archives. And as a bonus, silent colour 8mm film from Hollywood Bowl 1965, synched to sound:

Posted by wogew at Saturday, February 19, 2011 5 comments: Links to this post 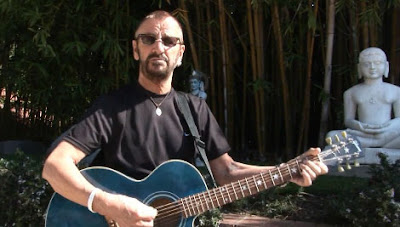 Ringo Starr (the famous guitar player) just announced on his official website that he's recording a new album and will be touring Europe this summer! Great news for us European fans, he hasn't toured Europe since 1998! As this year will be the fourtieth anniversary of his one and only visit to Norway, we are certainly hoping he'll come and see us here again. Norway isn't mentioned by Ringo, but he specifically singles out Russia, Spain and Denmark. As for his seventyfirst birthday, he will be celebrating it in Hamburg, Germany!
Posted by wogew at Friday, February 18, 2011 3 comments: Links to this post

With the advent of DVD recording, those of us who had amassed huge piles of VHS cassettes with Beatles material set about transferring our videos to the new format. Both the ones who had early or late generations of videos. Countless versions of Beatles footage in varying degrees of deterioration, depending on how far removed from the source the video tape was, circulate among DVD traders and as internet downloads. I'm talking about this because of a project, initiated by a collector and video and audio amateur editor, entitled "The Beatles Revisited" sets about to upgrade the DVD's currently circulating. This is being done by assembling the "best" available versions that are out there, releasing it as free downloads on the internet and inviting downloaders who have even better versions sitting on their shelves to send it to him. Then he'll substitute the material he has released with the upgraded material sent in, so that each time he sends out a new version, it'll be better than the previous one. Eventually, it will be as good as it's possible to get it.
His releases are always sent out for free, as it is a non-profit, "made by fans for fans" project which he is doing for the fun of it, for his own collection and for the enjoyment of all Beatles fans. So far, the following releases have been made available by him and his collaborators:

- "Around The Beatles"
- "The Empire Strikes Back" (CD and DVD from the "It's The Beatles" special at Liverpool Empire, plus the Morecambe and Wise show and the Royal Variety performnce)
- "The Early Beatles"/"The Music of Lennon/McCartney"
- "There Was Love All Around" (Footage from Holland 1964, a new reconstruction of the complete Melbourne concert at Festival Hall, and Munich 1966)
- "Unsurpassed Promos" (a collection of the Beatles' promotional films, resynched and generally improved)

The material which originates from PAL video is preserved in PAL on DVD also, and NTSC tapes are made into NTSC DVD's. Because of the demand from US collectors, he has also made available some of the PAL DVD's in NTSC, but the first release will be PAL, with a later optional NTSC release following. Upcoming NTSC releases are:

- A Palladium 63 slideshow, with upgraded and (as far as I know) unbooted audio
- A Palladium 64 slideshow
- My Melbourne recon - with stereo audio added (combining the radio broadcast and TV soundtrack)
- A reconstruction of the Scottish Roundup interview, using the recently aired footage,plus audio for the remainder
- A reconstruction of the alternate Some Other Guy clip, with the acetate audio synched up
- An It's The Beatles reconstruction, using some (again, as far as I know) unbooted video snippets from another collector
- A reconstruction of Big Night Out from Feb '64, using material from the film and video versions
- That 'I Should Have Know Better' Granada footage with the audio synched up properly
- That 'Ticket To Ride' snippet from Top Of the Pops with the negative effect fixed
- The Paris concert with remastered sound and in the correct order, and some aspect ratio adjustments
- Blackpool night Out from Aug '65 reconstructed from the best audio and video sources
- A reconstruction of the 'dark suits' Budokan concert, using the laserdisc and a different source which doesn't have the horrible double-imaging effects seen on the laserdisc.
- A pretty nice copy of the 'light suits' concert

Do you have superior quality material sitting on your shelf? Are you sitting on stuff that remains uncirculated on the collector's circuit? If you are intereted in contributing to the project, get in touch
As I've personally observed, fellow Beatles collectors will have died before The Beatles/Apple will release their material officially. The floodwave of releases we anticipated following the Beatles Anthology series never appeared. When asked if a release of the Beatles promotional films were imminent, then Apple director Neil Aspinall famously replied that it "would be too obvious". He too was to die without it happening. The "Let It Be" DVD has been in the air for decades, and was especially mentioned by McCartney in conjunction with the "Let It Be...Naked" release - but remains in the archives. Same thing for the "Magical Mystery Tour" project of theirs. The iTunes release of the Washington DC concert film late last year came as a complete surprise to everyone and showed us what a superb concert it really was, when it was revealed in such a quality. You can get in touch via my address or by uploading material.
Posted by wogew at Sunday, February 13, 2011 1 comment: Links to this post 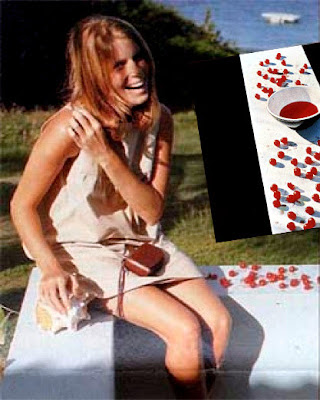 The next batch of releases in the McCartney Archives series, which sees the McCartney album catalogue remastered and upgraded are the twin solo albums "McCartney" (1970) and McCartney II (1980). They will be made available like this:
McCartney:
- 2CD version, the second disc containing rare unedited audio documents.
- 2CD + 1DVD version, also including a 100 pages book. 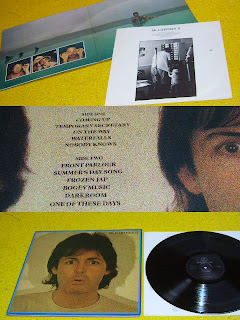 The contents of the DVD's as well as details about disc 2 on McCartney and disc 2 and 3 on McCartney II have not yet been relealed. McCartney II was originally planned as a double album before it was trimmed down, so there should be plenty of material to choose from on that one. No release date has been set yet, but we reckon that it's 2011, at least.
Posted by wogew at Friday, February 04, 2011 6 comments: Links to this post

Ringo Starr could be set to create his own video game, it has been reported.
The former Beatles drummer has trademarked the name ‘Ringo’ to be used in game and computer software, reports Uk.gamespot.com.
Starr has registered his name next to the description of "computer game software" and "downloadable computer games via the Internet and wireless devices."
Back in 2005, Ringo was also to become an animated super hero, in cooperation with Spider-man creator Stan Lee. That idea never seemed to come into fruition, but if it´s something that now is about to happen, a computer game spin off could be fun as well!
Posted by wogew at Wednesday, February 02, 2011 No comments: Links to this post

Possible Beatles-themed film in the works 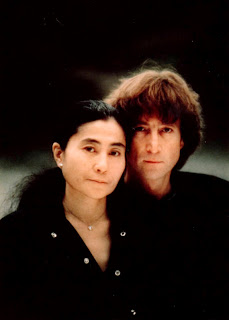 Talks are underway to produce a film featuring two of my favourites: Time travelling (I'm a fan of the Back To The Future trilogy of films) and The Beatles. Chris McCoy has written a script with a plot about two Beatles fans who discover a time-travelling device. They hatch a plan to go back in time to try and prevent John Lennon from ever meeting Yoko Ono, thus saving the band fom the break-up. If this sounds familiar, you've probably read the 2005 German book "Der Dreizehnte Beatle" ("The Thirteenth Beatle"), which has the same basic idea.
Posted by wogew at Tuesday, February 01, 2011 No comments: Links to this post