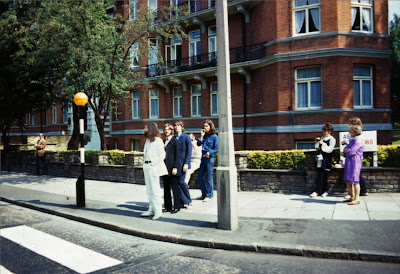 I wonder how many of these there are? This photo was sent me by one of my readers. Evidently it had been posted on a Beatles photo forum yesterday, and it's now "making the rounds". Click to see the bigger version. As you'll have noticed, two familiar bystanders are evident, the "mystery man" (Paul Cole, a now deceased Florida resident,  claimed to be that man) and the lady in a violet dress from a similar but more up-close photo. But there are two more bystanders, one hidden behind the aforementioned lady and another lady (a fan?) who seems to be taking photos! I wonder if her photos will appear some day... Also, there's someone sitting behind the Beatles...
We will continue to update our page "The Road Goes On Forever" with the Abbey Road cover shot images that mysteriously emerge as time goes by.

Updated September 2nd with a higher resolution version of the image, care of Miss Tammy's site. The uploader also revealed the source of the photo, it was hidden away in the Beatles RockBand game.
Posted by wogew at Monday, August 29, 2011

wow roger, i hadn't noticed that one on your other post - it's always such a thrill to see a "new" photo!!! to think i was at home a couple of subway stops away and had no idea this was going on.... keep up the great work! regards from a beautiful, windy morning in rio de janeiro.