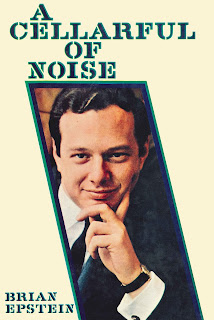 Over forty years since it was first published, Souvenir Press has released A CELLARFUL OF NOISE by Brian Epstein as a special edition e-book.
This is Brian Epstein’s own account (as ghost-written by Derek Taylor, WogBlog commentary) of his extraordinary life and, inevitably, it is the story of the Beatles, the greatest pop group of the twentieth century. What was the secret of Brian Epstein’s management of the Beatles, how did he guide a group from Liverpool to shake the world of popular music? Within two years of making their first record they were the biggest group in the world; how Brian Epstein achieved this is in this book. He frankly acknowledges his mistakes and weaknesses while identifying those factors that led to his achievements. Also included in the book are 33 photographs from Robert Freeman that provide revealing glimpses of the Beatles on their way to phenomenal success.