Paul McCartney returned to the stage after microphone malfunction 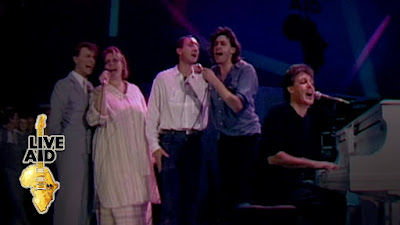 In 1985, when Paul McCartney was performing "Let It Be" at the Live Aid concert on Wembley Stadium, his vocal microphone was not working for the first part of the song. But the occasion was the first step in Paul's return to the stage.

Still, the audience knew the song well and helped with their singalong. Aware of the problem, Paul McCartney went to a studio the next day and re-recorded his "Let It Be" vocals, should there ever be need for it. He reckoned some TV channel may reprise the concert film, or perhaps it would see a video cassette release. That never happened, but in 2004, the Live Aid concert was finally available for purchase for the home video market, as a DVD set. Last year, the official Live Aid YouTube channel published this video, of Paul playing "Let It Be" on Live Aid, with his inaudible vocals replaced by the recording from the next day.


The appearance by Paul was his first live performance since the UK tour of Wings in December 1979. He must have enjoyed his comeback to the stage, because he then went on to play, unannounced, at the Prince's Trust anniversary concert on June 20th, 1986 - a year after "Live Aid". He did "I Saw Her Standing There", "Get Back" (duetting with Tina Turner) and the old closing number of the Beatles as well as on the first Wings tour, "Long Tall Sally". He was also in the backing band when David Bowie and Mick Jagger performed "Dancing In The Street", introduced by Paul.

The same year, Paul also took to the stage at the Royal Variety Command Performance on the 24th November, to perform his new song "Only Love Remains".

A little over a year later, 27th November 1987, Paul returned to the stage yet again, this time performing with a TV-studio band for the TV programme "The Last Resort". To a studio audience, Paul and the band performed "Don't Get Around Much Anymore", "I Saw Her Standing There" and "Lawdy Miss Clawdy", two of which were recently recorded for his upcoming "Russian" album, "CHOBA B CCCP

". The two songs in question, "Lawdy Miss Clawdy" and "Don't Get Around Much Anymore" were also released in 1987 for the U.K. market as they appeared on the two different 12"-singles for "Once Upon A Long Ago", one song on each record.

Just two years after this, Paul finally returned to touring again for a spell, lasting from 1989 to 1993. After that, he didn't tour again for another nine years. Thankfully, he went back to touring again in 2002 and has barely stayed off the road ever since.
Posted by wogew at Monday, August 19, 2019

I was there. What isn't apparent on the DVD is when the mic went out Paul was unaware of the problem and then the crowd started boo'ing - not at Paul but at the malfunction. Paul carried on like a pro and the mic eventually came back on. But for that brief moment I figure Paul must have been pissing himself.

I'm pretty sure Paul's repaired vocals were aired on TV long before the Live Aid DVD. I recall seeing a re-run of it, and it had been repaired - but I can't be sure when that was. Not too long after the event, as I recall, maybe later in 1985? I think there was a 'best of Live Aid' type of show, with highlights from the day.

The Live Aid performance (corrected vocal) has been officially released in digital format as well, as part of a larger Live Aid boxed set.

Popper is correct. The re-recorded LIB was broadcast as part of an end of year documentary in 1985.

The re-recorded LIB also got a broadcast within days when BBC Radio 1 broadcast a highlights show from the day. I remember taping it off the radio at the time.