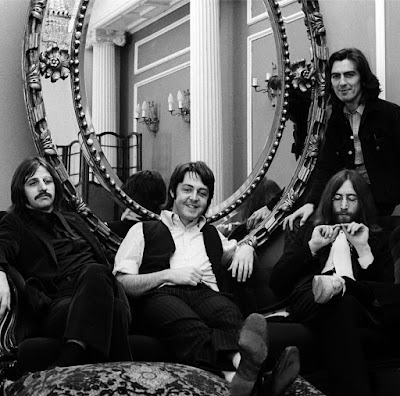 A tape recording of a business meeting in 3 Savile Row between three of the Beatles on September 8, 1969 has been the big news today. Speaking with Richard Williams of the Guardian about his upcoming touring multimedia show, "Hornsey Road", Beatles historian Mark Lewisohn played an excerpt of the tape which prompted the headline: "This tape rewrites everything we knew about the Beatles".

" as early as in 1976, and again in Nicholas Schaffner's book from the same era, "The Beatles Forever

," the tape has been largely neglected by later Beatles authors (see this post).

Earlier this year, Erik Taros and Richard Buskin revealed that they had indeed heard the tape, and used it as a starting point for one of their "Swinging Through The Sixties" podcasts. So it looks like it has began to circulate among high-end collectors of Beatles material. Lewisohn has now been able to pinpoint the date of the business meeting, something which has not been public knowledge before.

In the tape, John Lennon is positive about The Beatles making a new album after having completed "Abbey Road", and also brings up the subject of recording a single for the Christmas market. He also suggests that George should get equal treatment as a songwriter within the group, and should get four songs on the next album, with John and Paul also contributing four songs each, and two from Ringo, should he want to. Ringo was in hospital for a check up at the time of the meeting, so it was recorded for his sake, in order for him to be able to later listen in to their discussion. 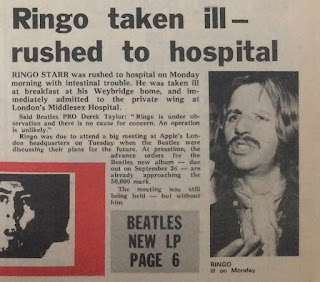 Perhaps the most shocking revelation in today's excerpt from the meeting was Paul McCartney being quoted as to say that he hadn't thought much of George as a songwriter until "Abbey Road".

Head on over to the Guardian and read the article.
Posted by wogew at Wednesday, September 11, 2019

Hopefully one day we'll get to at least read a transcript of this meeting.

Of course, within a couple of weeks John said he wanted a "divorce", so it's all moot.

torp it to full forward said...

This is another attempt at re-writing history so that Macca is the bad guy. Lennon was the one who brought the tape machine along to this meeting, obviously with a pre-arranged agenda as set out by the person who ruled his drug damaged life-Yoko Ono.

Ono had already driven a wedge in the band by "sitting on George's amp" during the Let it Be sessions, stealing his biscuits, arranging a meeting with Alan Klein behind the other's back. Ono -as unfashionable as it is to state it- was the one that drove the wedge. Why do we have to dance around the truth?

No doubt when they release the new Let It Be film they will completely overlook Yoko's Jam, the music they played when Harrison left etc. Why can't we see her Shakespearean role in all this, but instead we have to re-write history to please her. I guess she will get a final say in what is put in the movie. Truth should be the focus. It won't be though.

The other Beatles were rebelling against Paul in all sorts of ways. This was a manifestation-a meeting where it was essentially stated: "Ok Paul, here is how its going to be from now on." Credit to John for wanting to give George his due and showcase his talent. Paul was "relaxed" at the meeting-maybe drunk or high on herbal medicine? Accounts for his lack of inhibition and insensitivity-Paul was known to be overly inflated in the ego department then. Yoko's role in this was to support John and help him to be strong-so it could be argued she tried to break up the Beatles-or it could be argued that John was sick of the whole scene and couldn't play the game anymore with Paul always cracking the whip and needed her to encourage and support his move away. The fact was Without that whip cracking from Paul, no Let It Be and no Abbey Road. Ringo acknowledges that. Wish it could have had a happier ending but it couldn't last forever-drugs, divorce, growing older and inflated egos were a bad recipe for staying together. A little flexibility could have saved them absent Allen Klein-but Klein was a symbol of the rest of the Beatles rebellion against their de facto leader, Paul The Rolling Stones have kept together by being apart-not many other groups can easily succeed like that.

The thing is: it doesn't seem to me they were arguing about, but mapping out their next steps. So Paul's comments could have been tongue-in-cheek.
If you look closer, John was the one who rarely played on George's tracks from 1966 onwards.
Anyway,I'll take this tape as a cool thing, not negative at all.

How can anyone love the Beatles and hate Yoko or blame her for the break up of the Beatles? Would John Lennon really have allowed Yoko Ono to break up the Beatles if he'd wanted to stay? John loved Yoko and needed her in so many ways; listen to 'Julia' where he refers to his mother as an 'ocean child' - that's Yoko Ono. John fell out of love of being in the Beatles, as the others had at various times, and fell in love with Yoko. John stayed with the Beatles for quite some time after he go together with Yoko.
I believe the Beatles loved each other intensely and that the pressure and demands of being in the Beatles just became too much of a drag for all of them. For me the main factor in the Beatles braking up is the death of Brian Epstein and Paul taking on the leadership role and that heightening the tensions between the group.
Anyone who blames Yoko for the break up should do a lot more research and question if race and misogyny are part of their evaluation.
Peace and love.

Paul's current reason for Yoko being in the recording studio breaking their code of no woman allowed is that John was just madly in love. I guess this means he's admitting that he, George, and Ringo didn't love their wives as much.