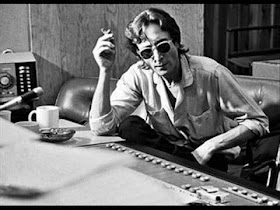 In 1980, when John Lennon talked about his and Yoko's new album "Double Fantasy", he said that all the songs came to him that year. As we now know from the "Lost Lennon Tapes" radio series, and bootlegs from it, as well as by other accounts, they did not. He kept making music, writing lyrics and recording simple demos all through the five years he spent as a "house husband" from when his son was born in 1975 and until he was ready to release his comeback album in 1980.

A few days ago on Twitter, I came across a handwritten note from John. In this note, he outlines plans for a new solo album. It's a track list for side 1 and 2 of an album of only his own songs, no Yoko. I tried to track down where the note came from, and all I could find was a 2009 slideshow from the New York Times, in conjunction with the then upcoming LennoNYC documentary, where the image of the note was attributed to Yoko.

There's only 3 tracks on side 2, which probably means the list was not finished. No sign of the song (Just Like) Starting Over, because that song was one of the last songs to be completed in time for the Double Fantasy sessions. "We didn't hear it until the last day of rehearsal," producer Jack Douglas said in 2005. Still, it's origins can be traced back to a couple of unfinished demo compositions, "Don't Be Crazy" and "My Life".

Here's John's outline of the sequencing of the album:

The note also features descriptions of the musical styles he wanted each of the songs tailored to.

Grow Old With Me: "Imagine" – Brass instead of strings or both. Bagpipes

(I Don’t Wanna) Face It; It’s too fast; should be laid back, L.A. style: plus "Havana Moon" sound on chorus (Chuck Berry)

N.B. All notes refer to the SOUND only!

Some of the songs was to end up on the couple's reimagined joint album "Double Fantasy", some on the posthumous "Milk and Honey". A couple of songs were never professionally recorded, "Grow Old With Me" was issued in demo form and George Martin later made an arrangement for it.
"Real Love" came out in demo form on a documentary film soundtrack and another demo formed the basis of later recording by the remaining ex-Beatles and was released as a Beatles single.