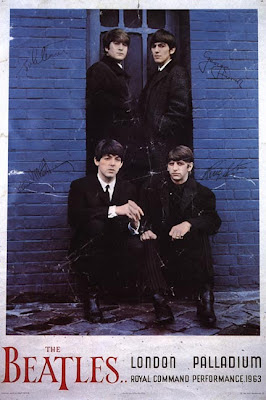 The Beatles Royal Command Performance poster is said to have been created around their first, 1964, visit to America, during which they appeared on the Ed Sullivan Show and played Carnegie Hall and Washington Coliseum. Printed in America by NEMS and widely distributed, the poster has became a mainstay among Beatles posters. Here's a later incarnation of the same poster, still being reprinted on a regular basis. Don't ask us how to tell the differences between a vintage poster and a new reprint, we have a feeling some of the manufacturers are giving their prints a vintage look. 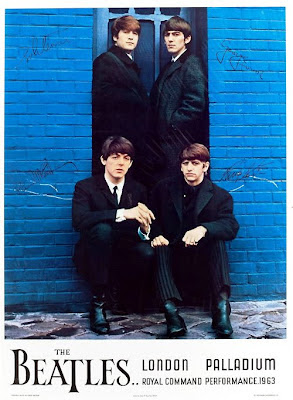 What's wrong with this picture? Well, for one thing, this annual show usually go under the name of "The Royal Variety Show" and second, it didn't take place, like the poster says, at the London Palladium, but rather at the Prince of Wales Theatre, November 4th, 1963 (There more inaccuracies concerning the poster, take a look at the comments section of this post). Many people think that John Lennon's famous "rattle yer jewellery" remark was aimed at Queen Elizabeth, but guess what? She wasn't attending the show. The Queen Mother and Princess Margaret was there, though. In the Rutles retelling of the story, it's an impersonator of Queen Elizabeth who is attending, or "Barry's mum", if you wish.

Apart from the aforementioned poster, in 1963 a 32-page 7" x 9" softback souvenir photo book named "The Beatles By Royal Command" was produced in the UK by the Daily Mirror newspaper, documenting their Royal Variety Show performance from arrival through rehearsals to the aftershow with a great live shot colour centrefold.


Of course, bootleggers used the front and back photos of this magazine as a cover for their EP from the four song concert. 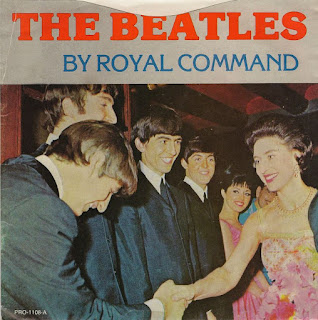 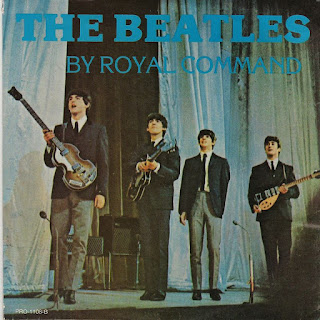 The Beatles did play a gig at the London Palladium in 1963. That happened on October 13th, but that was for the TV show "Val Parnell's Sunday Night at the London Palladium". Very few episodes of this programme have survived (5 out of original run's 126), the Beatles' episode being one of the lost ones (contrary to what Wikipedia says).


Joshua Alexander Joe Loss LVO OBE (22 June 1909 – 6 June 1990) was a British musician popular during the British dance band era, and was founder of the Joe Loss Orchestra. When this photo was taken, Elvis Costello's dad, Ross MacManus was a singer with the band.
Posted by wogew at Saturday, June 16, 2012 3 comments: Links to this post

Prism Films has released interviews with the two Denny's of Wings. Here's Laine:
And here's Seiwell:

Email ThisBlogThis!Share to TwitterShare to FacebookShare to Pinterest
Labels: Wings 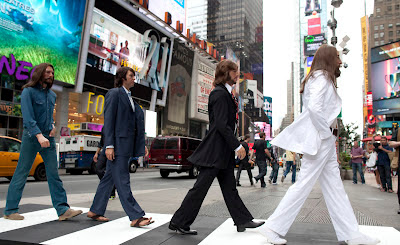 [New York, NY, June 14, 2012] - - Just in time for Sir Paul McCartney’s birthday, Madame Tussauds New York. unveiled wax figures of the Beatles.  The interactive exhibit features George, John, Paul and Ringo in their late 1960’s-era styling and allows fans to stand in line with the Beatles to create their own personalized album cover. The new exhibit will be in town from June 14th through September 5th, 2012.

Meanwhile, Sir Paul has postponed his June 30th and July 1st concerts in Denmark to later, unannounced dates. The reason given is that he's putting together a new show, which needs more rehearsals. Fan reactions have been that of disbelief. Many fans, particularly people from other countries than Denmark planning to attend the shows have timed their vacation, made travel arrangements, hired cars, bought tickets from second-hand vendors and booked hotel rooms. Refunds for the tickets will be given, but not booking fees. We hope Sir Paul hasn't been taken ill or something.
Posted by wogew at Friday, June 15, 2012 1 comment: Links to this post 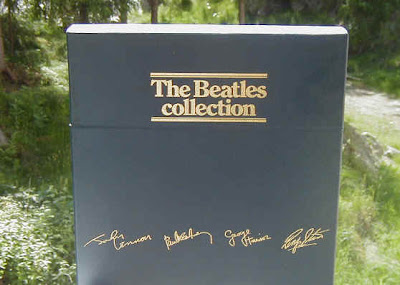 In a phone interview with the Danish newspaper "Extrabladet", Giles Martin reveals that he is currently working on a Beatles project. "I'm doing some Beatles stuff, and there's also a Disney show on the horizon". When asked about details about that "Beatles stuff", Giles answered: "No, that's very secret. If I tell you, I might as well kill myself, and I'm trying to avoid that".
Posted by wogew at Wednesday, June 13, 2012 8 comments: Links to this post 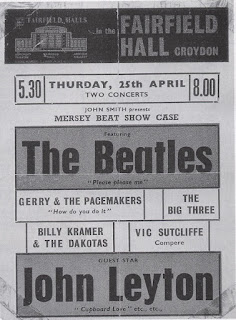 The Beatles play the Fairfield Halls, Croydon, on April 25th 1963. This was part of the 'Mersey Beat' tour one month after the release of their first album 'Please Please Me'. Also on the bill was Gerry and the Pacemakers, The Big Three, Billy J Kramer and the Dakotas (Ringo played their drum kit) and Vic Sutcliffe. John Leyton was supposed to be topping the bill but he didn't appear due to illness, so The Beatles topped the bill. 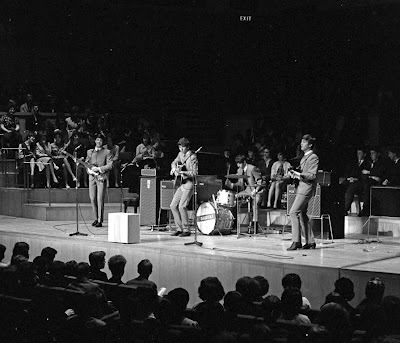 The April concert pictures were only recently rediscovered as a result of the e-hive/Fairfield 50th website. The pictures are important as they show an early Beatles concert early in their career. Photographer Andy Wright. Photographer Andy Wright was just a 15-year-old Woodcote Secondary School pupil when his father, a steward at The Fairfield Halls, got him back stage access to see The Beatles almost 50 years ago. The experience inspired a career in photography for Mr Wright, but the photographs sat gathering dust until a chance meeting last month. He said: “I met up with an old friend and he said he worked with the Fairfield Halls. I said I took photographs of the Beatles there, and he couldn’t believe it and told me about their anniversary archive. You know how it is, you just have boxes of rubbish in the attic so I was delighted I still had them.”
The Fab Four performed just six months after the venue opened 50 years ago.
Mr Wright, who lived in Coulsdon, said: “I was allowed to wait backstage. They had just come off so they were probably a bit shattered. We turned over a couple of theatre seats and took a couple of quick photographs. I only had 12 pictures on my roll of film. Film was expensive back then. The picture of all four of them backstage, potentially the most financially lucrative, was taken with the last shot I had."  Wright's six photos are available to watch over at the e-hive/Fairfield 50th website
You can read more about it in The Guardian.
Posted by wogew at Tuesday, June 12, 2012 No comments: Links to this post


The recordings which were used as the basis for albums such as 'The Beatles Live At the Hamburg Star Club 1962' is up for graps in an upcoming auction. The description is of a "noise-reduced" safety master version of the original tape, with a different running order of the songs than the records, and also featuring some recordings made by other groups, captured on the same tape. In the nineties, Apple records managed to win a court case, preventing anyone from ever releasing these recordings again. Although the original master tape was accounted for and returned to the record company, the safety master remained with the executive producer Larry Grossberg as an item of memorabilia, in a hinged BASF tape box and a chipped plastic reel.
In his last public appearance, George Harrison entered the witness box in London's High Court to halt the release of recordings of the band's early live appearances at the Star Club in Hamburg by Lingasong. The record label claimed that John Lennon had given permission for the band's performance in 1962 to be taped. Mr Justice Neuberger said Harrison had convinced him that Lingasong should be forced to stick by an injunction prohibiting it from selling the recording. He ruled that Lingasong would have to hand over the original Hamburg tapes, and pay both sides' costs. Thus ended the 20 year long tradition of small record labels releasing records made from these tapes. It's believed that Apple finally bothered to take action when the bigger label Sony released the material on CD in 1991. 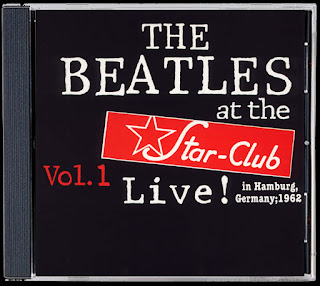 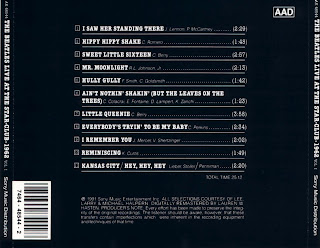 The auction is by "American memorabilia" and ends on June 21st. Hey, that's my girlfriend's birthday! Maybe I could... nah, she'd kill me. On the other hand, the 23d is my fiftieth birtday, so if any of you wealthy blog readers are reading this...
Auction site 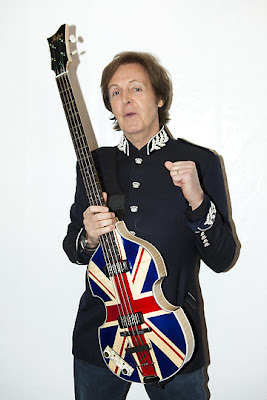 Paul McCartney surprised everyone tonight at the Queen's Diamond Jubilee Concert by using a Union Jack Höfner bass guitar during the closing number, Ob-la-di, Ob-la-da. The Union Jack Höfner is an original design from Höfner (Product #514179 from 2008), based on Paul McCartney's 1962 Violin Bass, but has since been discontinued. You can see pictures of the model here. Now that Paul has used one in concert, I'm sure the used ones will start commanding high prices on ebay.
Here's the McCartney performance, from YouTube. 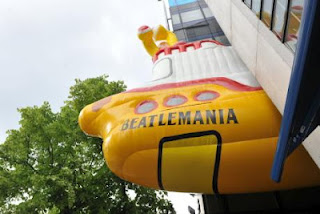 Sad to hear that the Beatles museum in Hamburg, Beatlemania Hamburg has to close. The interest in the Beatles was not as great as they had hoped for despite the positive feedback from both the visitors and the media. More than 150,000 visitors in total have been to the BEATLEMANIA since the Opening on May 29, 2009 - an impressive number, but not enough to cover the high costs incurred by this project.
Wogblog has reported about this museum since before it opened, and I've had the pleasure to visit it twice. One of the times I was there, Astrid Kirschherr came out of the elevator as I was entering it. I also had the pleasure of meeting Klaus Voormann at his launch of the "Sideman's Journey" project at the museum. The Beatlemania Hamurg was for me a better museum than "The Beatles' Story" in Liverpool, because the German museum had a lot of original memorabilia and artifacts from the sixties, whereas "The Beatles' Story" is full of modern day replicas. BEATLEMANIA will close its doors for the last time on June 30, 2012. We are hoping for a rescue operation...
Official website
Posted by wogew at Tuesday, June 05, 2012 3 comments: Links to this post