Piet Schreuders revisits a few Stockholm photo locations where The Beatles were depicted in 1963.

Never am I more happy than when I can combine my love for The Beatles with my love for the Superman comic books. Today, I happened to stumble upon a curiosity within the pages of the Superman comic book #177 from May 1965.
Half pages with gags featuring a character called "Casey The Cop", made by Henry Boltinoff were used as filler material in comic books from DC. This particular one feature, in the last frame of the strip, the name of the Beatles' white album ("The Beatles") as well as a couple of lyrics from the album's track "Revolution #9", namely "Twist" and "The Watusi". 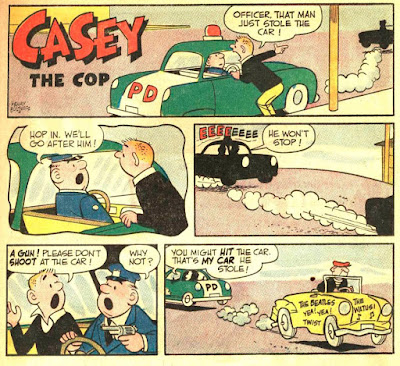 Thank you for your attention, now back to our regular programme. Or, check out our other posts about Superman - Beatles connections.
Posted by wogew at Friday, August 25, 2017 3 comments: Links to this post

There was a bit of a commotion last night, as the French Wikipedia page of Paul McCartney suddenly contained news about a new single called "A Life of Mercy", coming out on Monday August 28, and that the new studio album will be called "In The Universe and Beyond". Furthermore, the page said that two of Paul's collaborators on the new album will be Australian singer-songwriter Sia and the American musician, Beck.
Apparently, the Wikipedia contributor is a reliable one, still we can't help taking this piece of news with a grain of salt. The news was first spread on the Steve Hoffman music forum, and then reported on Richard Porter's blog, as far as we can tell. Further edits of the Wikipedia page inserted Denny Laine appearing on the new single, singing it as a duet with Paul, however that edit was not done by a regular contributor.
Of course, last time we checked - all these new edits were removed from said Wikipedia page.

Source: French Wikipedia
Posted by wogew at Thursday, August 24, 2017 No comments: Links to this post

Photos of the official Beatles calendars for 2018 from Danilo have been published, regular and special edition versions. The regular, poster-sized calendar is already available in the U.S. and has a Yellow Submarine theme, the special (square) edition has some 1968 photos, but from the supplied photos, one month features a Norway/Sweden 1968 record sleeve with a 1966 photo. Due out September 1 in USA, September 15 in the UK.

Here are some photos of the The Beatles Official 2018 Calendar A3 Poster Format (available from August 1, 2017 in USA, August 15 in the UK):


And here is the The Beatles Collector's Edition Official 2018 Calendar - Square Format With Record Sleeve Cover Calendar, due to be available from September 1, 2017.

See also our post with the unofficial calendars.
Posted by wogew at Thursday, August 10, 2017 3 comments: Links to this post

Turns out, one of the tracks on Ringo Starr's upcoming CD was recorded in Sweden!

You Can’t Fight Lightning composed by Richard Starkey himself and performed by Ringo alongside Alberta Cross.

This info courtesy of our friend Arno Guzek from Denmark. We don't know anything else about the recording, and suggest that Ringo may have "phoned in" his contribution, as we have had no report of the drummer visiting Sweden since performing there in 2011.

Ringo has already released a couple of the songs from his upcoming album. Here's "We’re On The Road Again" where Paul McCartney contributes on bass guitar and some vocals near the end:


The title track "Give More Love" is available as a single download, and also available through streaming services like Spotify.

Posted by wogew at Monday, August 07, 2017 No comments: Links to this post

Beatles photographer, Glasgow-born Harry Benson's book, previously out-of-print, is made available again at a cheaper price. This re-edition brings back the best of Benson’s luminous black and white Beatles portfolio. Complemented by quotes and newspaper clippings from the period, an introduction by the photographer himself adds exciting personal testimony to the photos.

It was in early 1964, that photographer Harry Benson received a call from the photo editor of London’s Daily Express, who asked him to cover The Beatles’ trip to Paris. It was the beginning of a career-defining relationship, which would both make Benson’s name and produce some of the most intimate photographs ever taken of The Beatles.

In Paris, Benson captured the Fab Four in the midst of a pillow fight at the George V Hotel, a spontaneous moment which came to epitomize the spirit of the band — Benson himself has called it the best shot of his career. Later that year, he followed the group on the road for their debut US tour, documenting their appearance on The Ed Sullivan Show, their surprising encounter with Cassius Clay, and the hysteria of New York Beatlemania. Benson also photographed George Harrison’s honeymoon in Barbados, documented the Beatles on the set of their debut movie A Hard Day’s Night, and was present on the now infamous final 1966 U.S. tour.

Harry Benson has photographed every US President since Eisenhower, the Civil Rights movement, and was next to Robert Kennedy when he was assassinated. As well as The Beatles, he has shot some of the biggest personalities of the last 50 years, including Michael Jackson, Elizabeth Taylor and Her Majesty The Queen. In 2009, he was made Commander of the British Empire (CBE).

Posted by wogew at Wednesday, August 02, 2017 No comments: Links to this post