Of course, mainstream media are all reporting about the most expensive item from the Beatles auction by Sotheby's which finished yesterday. John Lennon forgot a pair of round sunglasses in a car, and they went for £137,500 (USD 183 218) - a tad more than the estimated £6-8,000 the auction house expected.
But we are more interested in the music, and a tape which once belonged to Brian Epstein and consisted of half of the Decca audition session was sold for £62 500 (USD 83 281).

A 1959 Hofner President 'thinline' semi-acoustic guitar, owned by George Harrison and given to Alan Herring seems to not have attracted high enough bids.

You can check out all the auction results here.
Posted by wogew at Saturday, December 14, 2019 7 comments: Links to this post


Yesterday, Paul McCartney published either a cleaned-up version or a better copy of the music video for his 1979 Christmas hit single, "Wonderful Christmastime". Or it might just be a new transfer in higher quality. The song itself also seems to be a new edit, utilising bits from the longer version. The music video features his then group, Wings, whereas the single itself is really a solo performance, which he recorded that summer. But in December, Wings went on a tour of the U.K. and performed the song live, with fake snow falling down during the performance.

I was lucky enough to attend Paul's performance at the O2 in London last year, where he and his band were joined by the Capital Children's choir for this song, and again, fake snow fell during the song. Now that would have been the highlight of the evening, if it wasn't for the fact that after the song, he announced Ringo Starr on the stage.


This is one of McCartney's songs that tends to divide his fans into two camps, those who love it and those who hate it. I've always enjoyed it for what it is, it's a Christmas song, just like "Mary Had A Little Lamb" and "We All Stand Together" were children's songs.

It has been a staple and constantly radio played each Christmas in the U.K. alongside Lennon's "Happy X-mas (War is over)" ever since, that's for sure - but I'm not sure if that's the case in the U.S.A.

If McCartney has really dug into his video archives and transferred further music videos to the digital domain in higher quality, that's a good thing. The company Keefco, who produced his music videos at the time, was also responsible for the "Back To The Egg" TV special, and that is one of the gems we are hoping to see in a future release of that album in his Archives series. In an interview, Paul recently revealed that he had listened to the song "Arrow Through Me" from "Back To The Egg" for the first time in a long while, another clue to the next Archives release?

Another indication that something is going on in the music video department, is that the Linda McCartney account on YouTube has been publishing music videos of her songs these past few weeks.

Paul McCartney released a DVD compilation of a number of his music videos back in 2007, called "The McCartney Years

". perhaps the time is right for an upgrade to Blu-ray - and Dolby Atmos.
Posted by wogew at Friday, December 13, 2019 2 comments: Links to this post

The Beatles on People And Places October - December 1962 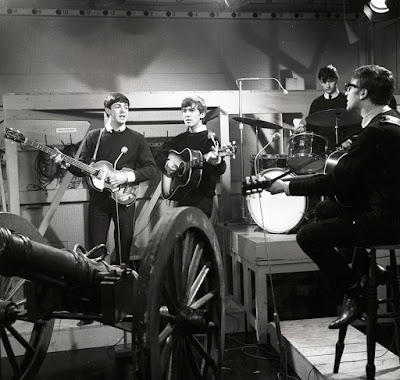 This just in from Mark Ashworth: A Friday night treat for you all.

The audio of the Beatles' appearances on Granada TV's People and Places were recorded by Adrian Killen, a 16 year old fan from Kirkdale on a reel to reel deck wired to the TV Speaker.

It was sold at auction and purchased by Apple in the 1990s. If I recall correctly the going rate at that time was £2000 per track.

Thirty years after I was allowed to hear the sample tape, I can tonight proudly present that same tape to you!

I've long since questioned why none of these recordings made it on to the Anthology CDs as the quality is great. Why Apple buy these things and then don't do anything with them is beyond me.

As per the photo below, note that John sang Love Me Do without his guitar and Ringo's drum break in the middle harmonica solo isn't too dissimilar from the Pete Best take on Anthology 1.

Some Other Guy is just wonderful and you can hear the madness at the end of track when, by prior arrangement John and Paul threw their hands above their heads and started whooping!

The Beatles just published an interview on their YouTube account, where Kevin Howlett and Sean Magee are having a conversation about the process of making new originals to press the 2019 Beatles singles from.

Ever since the original "Ringo-version" was lost very early on, later releases featuring this version of "Love Me Do" has had to rely on needledrops from an original single, starting with Ron Furmanek's Canadian "Love Me Do" single, which was used for the Capitol album "The Beatles Rarities" in 1980. Later releases of the Ringo version has occurred on "Past Masters", "Mono Masters", the 1982 20th anniversary 12"-single and the 2012 50th anniversary single (after having mistakenly used the Andy White-version on a first pressing). It turns out that the source record they wanted to use for "Love Me Do" this time, had some distortion in the harmonica solo, so Magee had to drop in about a second from a Swedish pressing.

There was also a drop in volume on "She Loves You", so Magee had to resort to fixing that in the digital domain. Apart from that, the only other songs that has been mastered digitally was "Free As A Bird" and "Real Love", but those were recorded digitally from the beginning, by Jeff Lynne.

Preparations for remastering was however also done digitally with each single, before cutting the actual tapes. All the efforts had as a goal to make the listening experience as close to listening to the original the sixties pressings as possible.

Posted by wogew at Wednesday, December 04, 2019 5 comments: Links to this post

Decca tape for sale at Sotheby's

A tape with part of The Beatles' famous unsuccessful audition for Decca Records is now the subject of an auction sale.

"This precious tape holds a special place in the annals of music history,” says Dr. Gabriel Heaton, Sotheby’s Books and Manuscripts Specialist. “This is a unique recording from the Beatles’ first commercial for Decca on New Year’s Day 1962—one of the first fruits of Brian Epstein's management and a huge opportunity for the young band.”

Under Epstein’s management, the yet-to-be discovered band recorded 15 songs for the record company during the Jan. 1 session. Unfortunately, this tape - which once belonged to Epstein himself - only holds seven of the fifteen songs.

Sotheby's description:
0.25 inch (6.35mm) open reel magnetic tape on a 5 inch (127mm) Phillips brand spool labelled "2" in ball-point, carrying c.15 minutes 20 seconds mono recording at 7.5 inches/second, of The Beatles performing seven songs ('Money', 'The Sheik of Araby', 'Memphis Tennessee', Three Cool Cats', 'Sure to Fall (in Love with You)', 'September in the Rain', and Like Dreamers Do') at Decca Studios, London, on 1 January 1962, housed in a contemporary box (Emitape, for a 5.75 inch spool) labelled "2" and "THE BEATLES" in ballpoint on the base; now housed in a collector's bespoke cloth box; end of tape frayed and brittle with 280mm detached; [with:] CD transfer, letters of provenance and authenticity

Beatles historian Mark Lewisohn has confirmed that this version of the Decca recording is unique: "The ending of Three Cool Cats is a single bass note longer than any version we've had before. The song September in the Rain is four seconds longer than any of the circulated versions as it includes a vocal line which is always edited out. These tiny differences do mark out the tape as original to Brian Epstein, not something created from any other known-to-exist source" (private communication, 2018).

The Beatles auction comprises 25 interesting lots, like clothes worn by The Beatles and John Lennon's toaster!

Link: Sotheby's
Posted by wogew at Tuesday, December 03, 2019 5 comments: Links to this post