The end of Star-Club

The very famous Star-Club in Grosse Freiheit, Hamburg closed its doors on December 31, 1969. 50 years later, one of the last club operators - Achim Reichel - tells the story about the end of an era.
The documentary features very rarely seen archive footage from a 1970 ZDF programme in colour, with rare pictures and interviews.

In the 1970 footage, we see the club is being redecorated and the main floor converted. The old stage piano, whose ivories has been tickled by rockers like Little Richard, Jerry Lee Lewis, Ray Charles and no doubt Paul McCartney, has been left on the floor on its way to the junk yard. The new owner, flanked by a couple of his women, brags about how sex is going to bring him millions on the premises.

The team from ZDF also travelled to Liverpool in 1970, for a short interview with Pete Best, at the time finally sporting somewhat of a Beatle haircut. Drums stowed away, Pete had a normal job by then, and this was his first public interview since the first part of the sixties.

The documentary is best suited for those of you who understand German, but the 1970 footage makes it worthwhile for anyone who is fond of this era.


Swedish Beatles author Hans Olof Gottfridsson and collaborator Richard Moore wrote a two part article for Record Collector about The Beatles' Star-Club recordings. These have now been made available from Richard’s company website Mint Audio Restoration. The articles are based on exclusive access to the original tape, and was written in close cooperation with the producer of the official Star-club records in 1977, Larry Grossberg. PDFs: Part 1 - Part 2.
Posted by wogew at Wednesday, January 08, 2020 1 comment: Links to this post

In 2012, the uncropped original photo which adorned the Beatles' album "Rubber Soul" album cover found its way to the internet. It was taken by the recently deceased Robert Freeman, and as legend has it: When projected on a square LP-sized white cardboard which accidentally bent, the fab four wanted to take advantage of the warped image and used that as the front cover.
The uncropped original has been enhanced using various computer techniques and started popping up on social media in 2019:

One thing that's evident from the original photo, enhanced or not, is that there is a loose thread on John Lennon's shoulder - not present on the U.K. or U.S.A. pressings of the album. In fact, it has been airbrushed away in most countries pressings of the LP. 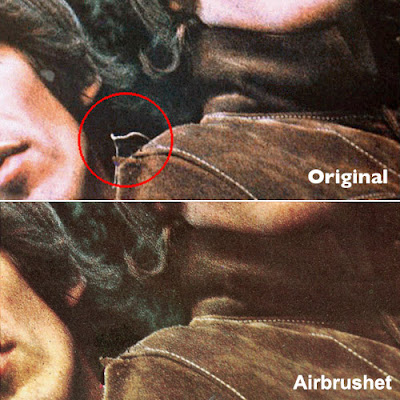 But in some countries, the thread was not airbrushed out. So far, we are aware of Argentinian and Mexican copies of the album where John's jacket is unashamedly displaying it's shortcomings.

It's also used on a Mexican EP cover.


So what did happen to John's brown suede jacket? Made by D.A. Millings but not part of a Beatles uniform, John Lennon first donned this jacket in public during their 1964 U.S. tour. 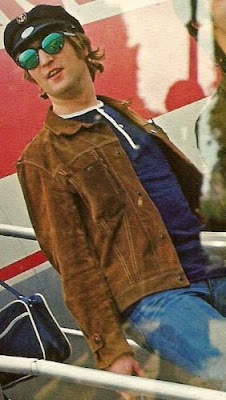 Pretty soon, the right shoulder epaulette went missing, with only the loose thread to show for it. We have no idea what happened to it. Torn off by a fan?
After a while, Lennon gave the jacket away to his housekeeper, Dorothy «Dot» Jarlett. She later auctioned off the garment, and it was bought by Hard Rock Café. It's now in circulation at their restaurants.

Posted by wogew at Tuesday, January 07, 2020 No comments: Links to this post

Lewisohn about the Star-Club tapes

I am the Eggpod is a Beatles podcast with Chris Shaw and guests, each episode discusses a Beatles- or solo album. On New Year's eve, an episode with Mark Lewisohn as guest discussed an album which was available legally between 1977 and 1998, after which it was deemed to be property of Apple Corps Ltd.

The album in question is of course The Beatles Live At The Star-Club, Hamburg, Germany; 1962. It consisted of various recordings from the stage at this German club, in late December, 1962.

Since it had just been announced that Neil Innes had passed, Lewisohn and host Chris Shaw started with remembering Innes, who also himself had guested the podcast in May 2019.

Lewisohn shares thoughts about the Beatles' time in Hamburg and these recordings, giving examples of John Lennon's audible humorous antics on stage, and reveals that it is Paul himself who has come up with the English lyrics to the song "Falling in love again", which is performed. You may listen to the podcast below.

Lewisohn had actually himself contributed to the plethora of records exploiting these tapes, by submitting liner notes to a three volume LP series on the small record company Breakaway Records in 1983. The series was called "The Hamburg Tapes".

During the podcast, Lewisohn also talks about the High Court hearing in 1998, where it was decided that the recordings were protected by copyright, and should never have been released in the first place. George Harrison testified on behalf of The Beatles, and the man responsible for taping the concerts, Ted "Kingsize" Taylor, was also present.

More episodes in this podcast series to be found here.
Posted by wogew at Monday, January 06, 2020 1 comment: Links to this post

On Amazon in both the UK and USA, a book with the title The Beatles Get Back was announced for release on 15 October 2020. John Bezzini noticed the listing on Amazon and contacted the publisher and received this info: "The Beatles Get Back" is the authorized story of the making of the "Let it Be" album and the Beatles’ break-up, told through exclusive photographs, transcripts of the recording sessions, and an essay by Hanif Kureishi. The book will be the companion to the film directed by Peter Jackson, both released next fall (exact date to be announced).

Links to pre-order the book:
Amazon (UK)
Amazon (USA)
Posted by wogew at Thursday, January 02, 2020 8 comments: Links to this post

This just in: according to an internal Universal Music catalogue of upcoming releases, Paul McCartney’s 1997 album «Flaming Pie» is next up to get the archive treatment. Release date is July 24th, and the ltd ed deluxe edition will consist of 5CDs and 2/DVDs.

Upon its initial release, there was a special offer from Best Buy in the U.S.A. where you got an extra CD containing an episode of McCartney’s radio show, «Oobujoobu». There was a video cassette available about the making of the album, «In the world tonight», which was later made available as a DVD. Several music videos were produced for the singles «Young boy», «Beautiful Night» and «The world tonight», but these were only excerpted in the home video release. Another music video for the Maureen Starkey tribute «Little Willow» was only shown once, on Oprah.

There was a version of the «Beautiful Night» video (also featuring Ringo), which had partial nudity and hasn’t been seen since it was shown a few times on MTV Europe. Several constellations of the singles were released, including vinyl picture discs.
Posted by wogew at Thursday, January 02, 2020 11 comments: Links to this post