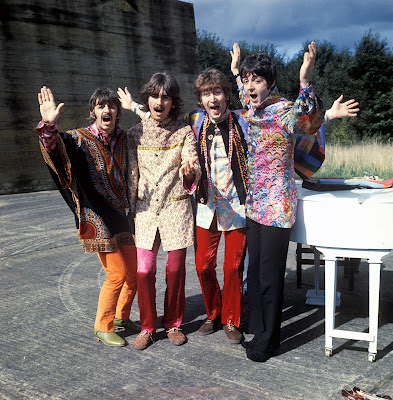 The Beatles/Apple has just released a trailer for the upcoming edition of Magical Mystery Tour.

– Songs you’ll never forget, the film you’ve never seen and a story that’s never been heard. In 1967, in the wake of the extraordinary impact of the Sgt. Pepper’s Lonely Hearts Club Band album and the One World satellite broadcast of All You Need Is Love, The Beatles devised, wrote and directed their third film, Magical Mystery Tour, a dreamlike story of a coach day trip to the seaside. Apple Films have fully restored the long out-of-print, classic feature film for October 10th release worldwide on DVD and Blu-ray with a remixed soundtrack (5.1 and stereo) and special features.

Magical Mystery Tour will be available in DVD and Blu-ray packages, and in a special, 10”x10” boxed deluxe edition. The deluxe edition includes both the DVD and Blu-ray, as well as a 60-page book with background information, photographs and documentation from the production, and a faithful reproduction of the mono double 7” vinyl EP of the film’s six new Beatles songs, originally issued in the UK to complement the film’s 1967 release.

The restoration of Magical Mystery Tour has been overseen by Paul Rutan Jr. of Eque Inc., the same company that handled the much acclaimed restoration of Yellow Submarine. The soundtrack work was done at Abbey Road Studios by Giles Martin and Sam Okell.

All of the packages contain a host of special features, packed with unseen footage. There are newly-filmed interviews with Paul McCartney, Ringo Starr, and other members of the film’s cast and crew, as well as a director’s audio commentary recorded by Paul.

In September 1967, The Beatles loaded a film crew onto a bus along with friends, family and cast and headed west on the A30 out of London to make their third film, this time conceived and directed by The Beatles themselves.

“Paul said ‘Look I’ve got this idea’ and we said ‘great!’ and all he had was this circle and a little dot on the top – that’s where we started,” explains Ringo. “It wasn’t the kind of thing where you could say ‘Ladies and gentlemen, what you are about to see is the product of our imaginations and believe me, at this point they are quite vivid,’” says Paul. The film follows a loose narrative and showcased six new songs: “Magical Mystery Tour,” “The Fool On The Hill,” “I Am The Walrus,” “Flying,” “Blue Jay Way,” and “Your Mother Should Know.”

Although the 53 minute film was shot in glorious colour, it premiered on UK television in black and white. Broadcast by BBC1 at 8:35pm on Boxing Day, the film immediately attracted widespread controversy as middle England and the establishment media erupted with indignation. “How dare they?” they cried, “They’re not film directors! Who do they think they are?” they howled. Where were the four loveable moptops of Help! and A Hard Day’s Night? Those Beatles were out of control!

Partly as an upshot of this adverse reaction, the film never had a US broadcast and very limited distribution in the rest of the World.

Operating at the time as the world’s de facto “cultural mission control,” The Beatles were already influencing filmmakers, artists and musicians, while also drawing inspiration from their contemporaries. 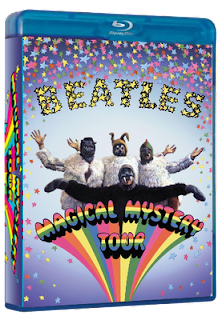 MAGICAL MYSTERY TOUR SPECIAL FEATURES
Director’s Commentary – by Paul McCartney
The Making of Magical Mystery Tour (19:05) - Features interviews with Paul and Ringo, along with other cast members and crew. Includes unseen footage.
Ringo the actor (2:30) - Ringo Starr reflecting on his role in the film.
Meet The Supporting Cast (11:27) - A feature on the background and careers of Nat Jackley, Jessie Robins, Ivor Cutler, The Bonzo Dog Doo-Dah Band, Victor Spinetti, George Claydon, and Derek Royle.
‘Your Mother Should Know’ (2:35) ‘Blue Jay Way’ (3:53) ‘The Fool On The Hill’ (3:05) - Three new edits of these performances all featuring footage not seen in the original film.
‘Hello Goodbye’ as featured in Top of the Pops 1967 (3:24) - The Beatles allowed the BBC to film them in the edit suite where they were working on Magical Mystery Tour. This was then turned into a promo by the BBC, who shot their own additional footage. It was then broadcast on Top of the Pops to mark the ‘Hello Goodbye’ single going to No 1 in December 1967.
Nat's Dream (2:50) - A scene directed by John featuring Nat Jackley and not included in the original film.
Ivor Cutler – ‘I’m Going In A Field’ (2:35) - Ivor performs ‘I'm Going In A Field’, in a field. This scene was not included in the original film.
Traffic – ‘Here We Go Round The Mulberry Bush’ (1:53) - The filming of Traffic acting out their 1967 hit single ‘Here We Go Round The Mulberry Bush’ was commissioned by The Beatles for possible inclusion in Magical Mystery Tour but was not used in the final edit.
TECHNICAL SPEC
Aspect ratio - 1.33:1
Frame rate - 1080i 59.94
Audio Options: DTS-HD Master Audio 5.1 Dolby Digital 5.1 PCM stereo for Blu-Ray
Dolby Digital for DVD
Subtitle language options for feature, extras and commentary:
English, Français, Deutsch, Español, Italiano, Português, Nederlande, Svenska, Norsk, Dansk, Suomi.

For the first time ever there will be a limited theatrical release in certain territories from September 27th.
Posted by wogew at Wednesday, August 22, 2012

Thanks very much for posting this info.

I don't know if it makes a huge difference, but I'm looking at the tech specs and wondering why 1080i and not 1080p for the picture?

Still, the Paul commentary and the prospect of owning a nice replica of the original double ep is good enough for me! I can't wait to have a good edition of this.

Incidentally, one of my good friends, who is also a huge Beatles fan, recently discovered that his parents had all the original vinyls stashed in the attic (including the Let It Be box).

The original Magical Mystery Tour ep was there- with horrible scribbles all over the booklet. My friend couldn't believe it had been vandalised, and asked his dad: 'what the hell happened to this?!?' his dad replied, 'that was you, when you were a kid.' My friend now feels very bad...

Glad that they are including the ep! Also, the un-booted TOTP promo film included?! Very nice! They seem to take the right direction on presenting the film (which they didn't have complete control for AHDN or Help! releases). Let's hope that Let It Be doesn't get messed up! They have hours and hours of footage. Possible that the deluxe version would replicate the original vinyl box set of Let It Be? Should be quite interesting!

The inclution of Traffic scene is be something cool!