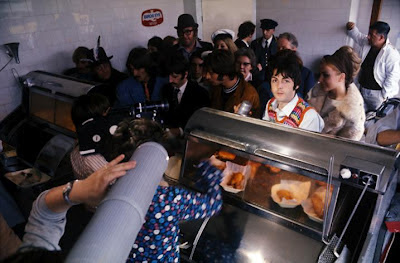 Smedley's chip shop, 15 September 1967. From the Kenwood blog: It's not every day that one's chippy gets a visit from the cast of Magical Mystery Tour; that much, at least, can safely be stated. The story goes that the proprietors, James and Amy Smedley, were actually the grand-parents of "little" Nicola Yale (or Hale, as she was known), familiar from the film. Mrs Smedley's niece was apparently in charge of recruiting extras, and thus the Smedley-Yale-Hales got embroiled.

Only a small section of the footage made it into the final film (in the I Am The Walrus segment),but now behind-the-scenes shots have been compiled by makers of the new Arena documentary and was being shown online from yesterday.
The group are seen piling into the chippy and standing at the stainless steel counter as they order their food along with the rest of their coach party, en route to Newquay, Cornwall.
The scenes, which had ended up on the cutting room floor, were discovered as the Arena team worked on their programme which ties in with the newly remastered version of Magical Mystery Tour.

Here's the clip, intercut with scenes from what the place looks like today.