The inspiration behind the Beatles' Apple Corps was this painting by René Magritte. This 1967 photo of John Lennon, Mick Jagger and a woman in Paul's living room in Cavendish Avenue, is the first time I've seen the painting in colour. It confirms that the Apple is green, that the table is somewhat nut coloured and the background is brownish. Something like this:


The photo was taken with Lizzie Bravo's camera. Here's the story from Lizzie: "(I) was outside waiting for John, as usual. That’s Mick Jagger, and there’s a young lady there too. Terry Doran was there also, and George arrived as Stu (Kendell) was leaving. Terry took the photos of Stuart and the three guys (John, Paul and Mick), but Stu only has one, which he gave me in high definition. His whole story, beautifully told to me in detail several times, is in my book."
Lizzie Bravo's book has yet to be published.

Here's the only photo I had previously seen:

Paul still owns the painting. Here's the accompanying photo of Paul from the same occasion in 1967: 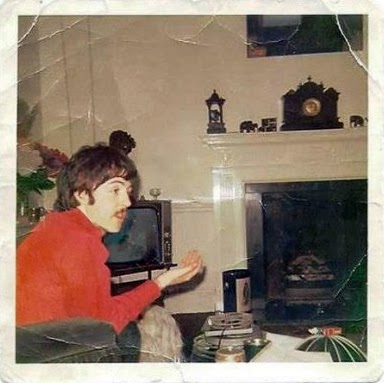 Put them together and you get the full scene. Note the abandoned first design of the Sgt. Pepper drum skin on Paul's wall, John kept the one they actually used:

Hi Roger! Those two photos together look totally fab! It was Stuart's original idea, to get John and Paul together. But he didn't want to be too obvious with his picture taking, and my cheap copy of an Instamatic bought at Boots (which I still have...) only had ONE button, the one you press to take a photo, so no wide-angle lens there at all... What an amazing idea: you made Stuart's plan happen! We've had those photos for a while (he had lost them but I located copies on the Internet) but never thought of doing what you did. Well done!

Paul hasn't shaved his moustache yet, so this is presumably from before Sgt. Pepper's release.