Paul McCartney back to scratch 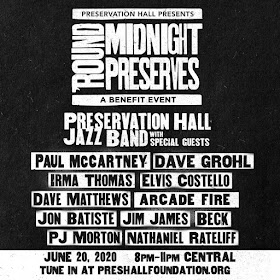 It was back to scratch for Paul McCartney in at least two ways Saturday night. In the ‘Round Midnight Preserves virtual livestream benefit, hosted Saturday by New Orleans’ Preservation Hall Jazz Band, Paul's number (together with Elvis Costello, Jim James, Dave Matthews, Irma Thomas and Nathaniel Ratleliff) was "When The Saints Go Marchin' In".

It was a hark back to the Beatles' very first appearance on a 45 rpm back in October 1961. The single, "My Bonnie (lies over the ocean) c/w "When The Saints Go Marchin' In" was first released in Germany under the name Tony Sheridan and the Beat Brothers, and then in Great Britain in January 1962. Come 1964, it would be rereleased and credited to The Beatles, with Tony Sheridan on vocals.

Another reason this was back to scratch for Paul, was that he elected to play trumpet on the song! The trumpet was Paul's first instrument, bought him by his dad when he was just a kid. He did learn it a bit, but soon enought convinced his dad to trade it with a guitar - which proved to be a good idea!
Paul is a bit rusty on the old trumpet in this rendition, but the song really picks up a good swing after a while, and Paul also sings a very "Satchmo"-channelled verse.

Sirpaulru has provided us with an upload of the performance on YouTube. Since this is not an official channel, you should catch it while you can.