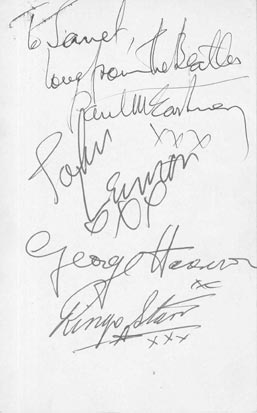 The Beatles performed their first concert in Luton at the Majestic Ballroom in Mill Street on April 17, 1963, about a month before their first album, Please Please Me, was released and made them household names.
We recently came across another one of those familiar Parlophone promo post cards from this Luton concert. Janet was the lucky girl who got their autographs, and she remembers sitting on John Lennon's lap as she allowed him to use her back as a rest for signing the post card.
Signed to the verso by all four individually, John Lennon, Paul McCartney (who adds an inscription To Janet, love from The Beatles), George Harrison and Ringo Starr. Each have signed in bold blue or black inks and all have added kisses beneath their signatures.
One of our blog readers have gotten in touch with us and sent us this item from his collection. It's from the same Luton concert, and the post card again has been used to write down the group's set list for the evening. Lucky Lorraine (maybe a friend of Janet's ?) was given this item, and The Beatles all signed the card for her. 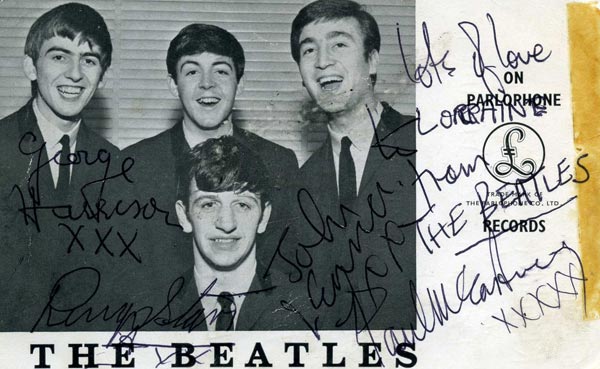 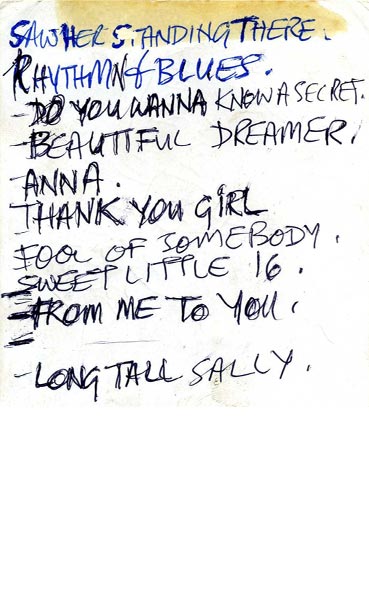 The current owner of the card is Chuck Gunderson, and he would like to get in touch with other collectors of Beatles autographs and set lists, to compare notes. You may contact him at this email: GUNDERSON910@aol.com.

All of these songs have since been released on albums by the Beatles (some on the "Live at the BBC" collection), except for two: Beautiful Dreamer exists as a BBC radio performance, but the quality of the recording was deemed too poor for release on the Live at the BBC album. Still, it circulates among collectors. And then there's James Ray's hit single "If You Gotta Make A Fool Of Somebody", which The Beatles never recorded for BBC radio. A tape of the Beatles performing this song and others at the Cavern Club in 1962 is in the hands of Paul McCartney, who purchased the tape at an auction on August 29,1985. The fidelity of the tape was probably below the standards for it's inclusion on the Beatles Anthology albums.
The story of James Ray is one of the sadder ones in R&B history. Blessed with a voice that was uncannily similar to Little Willie John's, James Ray made his first record in 1959 for the Gallant label ("Make Her Mine", under the name Little Jimmy Ray). However, the record flopped, and by 1962 James Ray was homeless, singing in the street for pennies and nickels. Ray was rediscovered by Gerry Granahan of Caprice Records, who brought him to a New York studio to record "If You Gotta Make A Fool Of Somebody", which reached #22 on the Billboard Hot 100 in 1962 and was also a top 10 R&B hit. The single was issued in the UK in 1962 as well, and was performed in concerts by The Beatles, with John and Paul sharing the vocals.  The song was written by songwriter Rudy Clark who also penned "I've Got My Mind Set On You" for James Ray.
George was the first Beatle to set foot on American soil. In September 1963, he spent a fortnight with his sister Louise, a resident of Benton, a small mining town in southern Illinois. George wandered the trim streets, checked out the stores, and  returned to the UK with a Rickenbacker 425 and a copy of James Ray's album, which also contained the song Harrison was to revive in the 80's, "(I've )Got My Mind Set On You".
John Lennon was also a fan and included "If You Gotta Make a Fool of Somebody" on his jukebox, the contents of which were issued as a double CD in 2004 after the jukebox itself was purchased at an auction.
Manchester band Freddie and the Dreamers got around to record "If You Gotta Make a Fool of Somebody", and the single reached number 3 in the charts in mid-1963.
James Ray is thought to have died in 1964 due to a drug overdose, only 23 years old.
"If You Gotta Make a Fool of Somebody" was also covered by Ron Wood in 1974 on his "I've got my own album to do", an album George Harrison was involved in. The song "was sung with staggering sincerity by Wood, Rod Stewart and Keith Richards", according to the Rolling Stone review.

If you would like to share some of your recollections or memorabilia from the 1963 Beatles concerts, feel free to get in touch!
Posted by wogew at Tuesday, July 29, 2008