The story of a photo 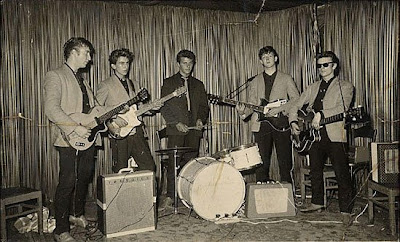 The Beatles after a hard day's night at the Indra Club

This picture was taken between August 17. and October 3. at the Indra Club, where the Beatles played the first time they came to Hamburg. It was probably taken one of the first nights, to advertise the band by having a photo in the door of the club. There are 4 more pictures of the band taken at probably the same occasion (wearing the same clothes) but this is the one which looks the most like a publicity still. Notice the early instruments, John with his Höfner Club 40 (he was to buy his Rickenbacker 325 during this visit), George and his trusty Resonet Futurama (hear it on 'Cry For A Shadow'), Paul has his brand new Rosetti Solid 7 plugged into his little green Elpico amp and Stu is of course playing his Höfner 333. All the guitarists are fingering chords - all except Stu. Looks like Lennon has been using a towel (behind him, by the chair) to dry off most of the sweat, but his face and hair still looks moist. Pete Best joined the band just before they left for Hamburg, and wasn't a member when they had their stage jackets made. 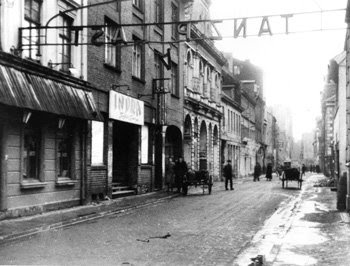 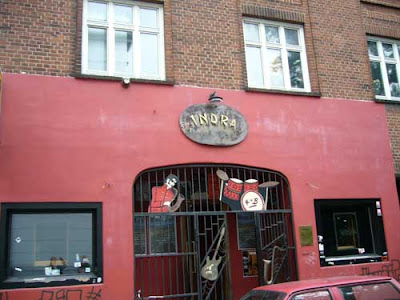 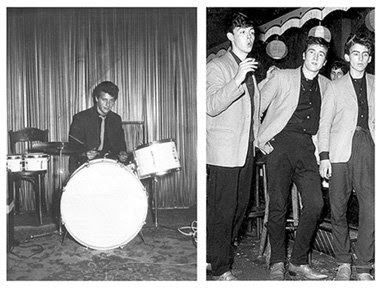 According to George, the jackets they were wearing here were lilac, and according to Paul they had been sown by his next-door neighbour in Forthlin Road, Mr Richards, a tailor by trade. The members of the band had all shown up at Paul's place to be measured up for the jackets. After only a couple of weeks playing at the damp Indra however, the outfits were all but ruined and they had to shop for new stage suits.
How many of the original copies of this photo that still exist is not known, but I know about four.

Often when you find this photo on the internet for sale, you can see that it is the same copy. It circulates among collectors and at the time I wrote this article it was up for auction by the company "It's Only Rock'n'Roll".

The company informed us that on the reverse is written in bold green ink "The Beatles...Stew, Paul McCartny, Pete Best, George Harrison, Johnny Lennon, with a "The Beatles" doodle and embellishments. 5.5" x 3.5" with considerable creasing, tape marks. 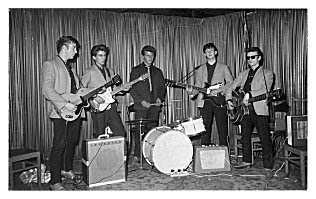 The copy circulating among collectors. Click picture to view original.
It looks a bit better when rendered in black and white, click here for a bigger version.

George's copy of the same photo is depicted on pages 46-47 in the Beatles' Anthology book, but his copy is a bit worse for wear than the previous one. Considering that they still used it in the book, one could possibly conclude that either Paul hasn't got his copy of the photo, or his may be in an even sorrier state than George's. Maybe Yoko has got John's copy, but she can't have made it available to the makers of the Anthology book. In addition to these, peradventure Stu's copy is in the possession of his family?

Pete Best seems to have a very decent copy of this photograph, and you can buy a copy from his website, petebest.com.
He has made use of the photo in some of his books, but it has always been cropped slightly, when compared with George's and the Collector's item one. 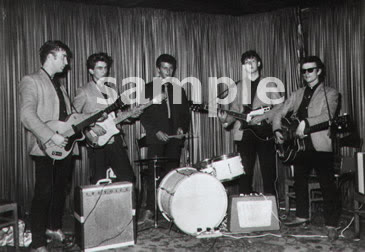 This is Pete's copy of the photo

The Indra Club in Hamburg is still in existence, and has a website. Here you can also find what looks like a nice copy of this photo. 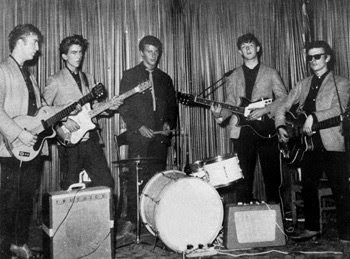 This copy is depicted on the Indra Club website.

In December 2005 I spent several hours painstakingly restoring a copy of this photo. I printed out and framed two of them and one is now hanging on my wall, the other one was given away to a friend as a Christmas gift. 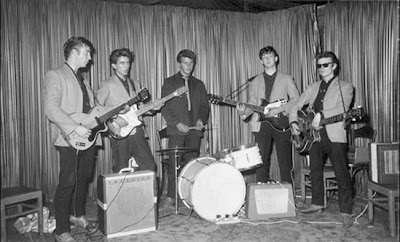 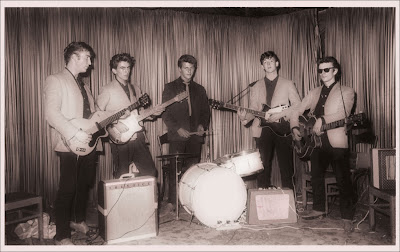 I also took the time to do a colourisation job, and the colourised photo was framed and presented to Rory Best, Pete's brother, at the Casbah Club in Liverpool in 2008. 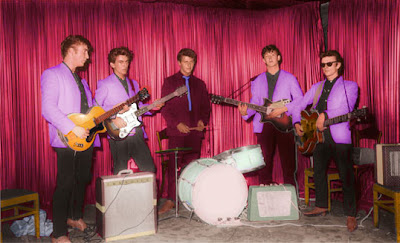 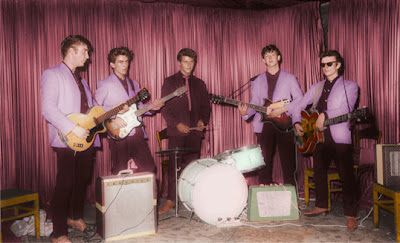 Colourised version 2 was a bit more subdued, and Pete was given a red tie

The Indra Club was opened by Bruno Koschmider in 1950. The Beatles played there for the first time on August 17th, 1960 and stayed there as the resident band for 48 nights, before they upgraded to the more popular Kaiserkeller, further down the street. Next door to the Indra Club was another club, called the Blockhütte. In the Blockhütte, the musicians from the Star Club (which opened in the spring of 1962) used to meet for drinks with colleagues and fans, often until the early morning hours. The Blockhütte building was torn down in 1982, and the Indra Club changed it's name to the Blockhütte for a while. This didn't prove very successful, and the club took back it's original name.
In September 2006 I spent a working week in Hamburg, and one night I went to the Indra Club. Although I had been to Hamburg several times earlier, this was the first time that the Indra Club was actually open for business while I was there. I went into the club, finding a rather worn-down but cozy club. The walls were decorated with a few photos of sixties and seventies bands, quite a few of them were photos of the Beatles at the Top Ten Club, taken down the road at the Reeperbahn. Several young german boys and girls aged around their twenties seemed to have made the club their hangout, and a jazz band was playing. After a few beers and a double Havana Club I decided to join the band, there was a vacancy on congas that night. A friend of mine took some photos of the occasion, so I now have proof that I too, was a musician playing at the Indra! 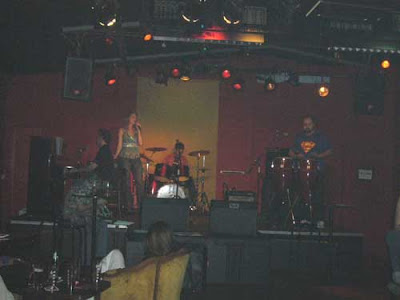 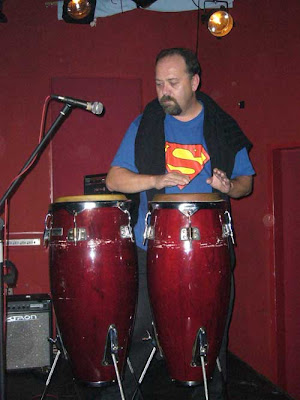 Plying the congas at the Indra Club
Posted by wogew at Friday, April 24, 2009

Great article on the Indra club. I know you wrote it a while ago, but if you read this, have you ever noticed that there seemed to be TWO Indra clubs in that area? Here's a link to one photograph of it I found on Getty images that is completely different from what is usually shown.........


Obviously that is not the same location as the Indra today, this one is on a corner and the front is completely different. So it makes me wonder is the one now on 64 Große Freiheit, the one you went to the original location or was the Indra at an entirely different location when the Beatles played there?