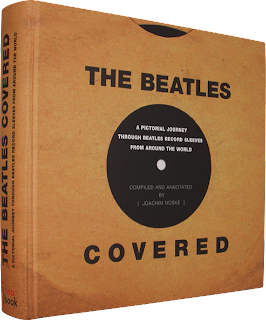 I've mentioned this book here before, but I've finally managed to take the time to review it in Norwegian for Norwegian Wood - The Beatles Fan Club of Norway, so I thought I'd bring an English version of my review to my faithful blog readers.
The Beatles Covered by Joachim Noske, with the slogan/subtitle "a pictorial journey through Beatles record releases from around the world" is just that. Nearly 800 pages and 6 kilograms heavy, in LP size, it lists and depicts records from five continents. Each continent gets it's own section, divided into chapters by country (or territory). The focus is on EMI releases (vinyl albums, singles and EP's only, no cassettes or CD's), but also finds space to cover the Polydor releases (Sheridan), the Star Club releases and the releases from the Decca audition. A few bootlegs are also thrown in for good measure.
An appendix deals with various subjects like the boxed album collections, the Christmas fan club releases, the various versions of the Magical Mystery Tour releases etc. A chapter is also devoted to discography books and publications from around the world. Two norwegian publications are listed, "The Beatles i Norge" ("The Beatles in Norway"), which was published by your's truly and Knut Uller back in 1994 and H.P. Nenseth's "A Complete Discography of Norwegian Beatles Records" from 1997. Neither of us have been mentioned by name in the book, though. The only Norwegian collector mentioned is Ivar Oellingrath, who also provided insight into the Beatles releases from India. In reviewing the book, I need to concentrate on the country whose releases I'm most familiar with, my native Norway. I'm not big on international Beatles releases, but I believe that by reviewing the Norwegian section of the book, I'm sure other countries releases will follow the same pattern. 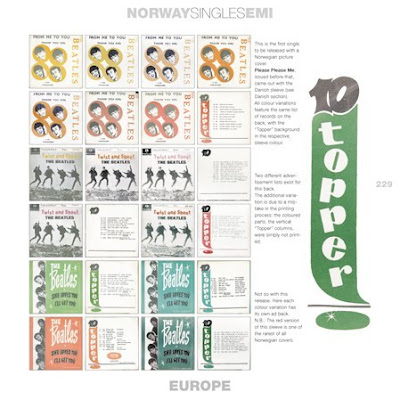 The Norwegian chapter starts by listing the singles. Only the singles whose covers were printed in Norway are included. The first single in Norway was Please Please Me, which featured a cover imported from Denmark, so the singles list omits it completely, and starts with the second single, which was From Me To You.  Based on criteria like paper quality and colour, some Norwegian record collectors are actually fronting a theory that some of the covers identified as Danish import covers for the "Please Please Me" single was actually printed in Norway, but I guess this has never been substantiated and thus this information has not been included here.
"From Me To You" is presented in no fewer than seven colour variations, ranging from orange to red, and a couple of them looks very similar. One example is given as to how the back cover looks like. 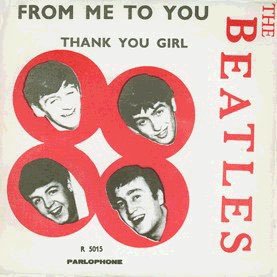 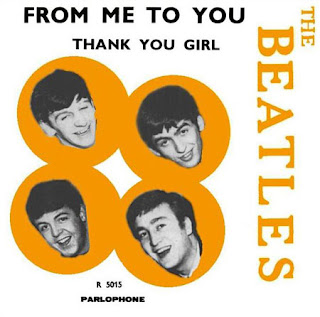 The size of these images in the book is not much bigger than a regular postage stamp. The next single up is Twist and Shout/Boys, presented with five different cover variations and three rear views. She Loves You has been depicted in several nuances of green, and also in the rare red variety. (For a look at the various Norwegian singles, you can see some of the variations in this earlier blog post of mine).
The Beatles Covered fails when it comes to the All My Loving/I Saw Her Standing There single. It delivers in depicting three different colour varations but it completely omits the rare later re-release, which featured a different typeface and placement for the records catalogue number and the "I Saw Her Standing There" title, and also a different back cover, featuring the EMI logo. 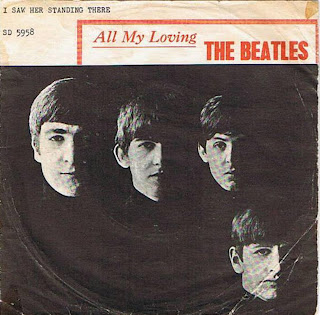 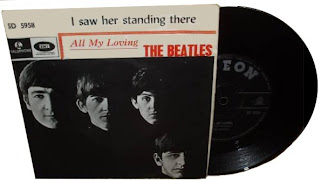 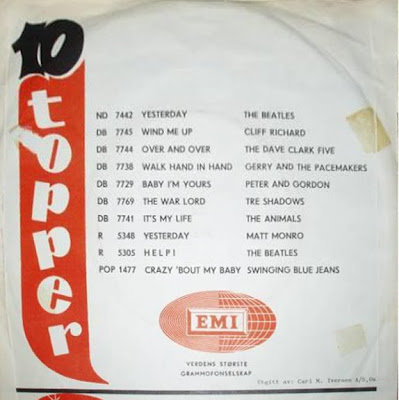 The back cover of the late re-release.

For the I Want To Hold Your Hand single, only the true Norwegian blue (the Norwegian blue? What's wrong with it?) version has been depicted. Of course, this single was also released in Norway with a Danish import cover in orange. Again, some Norwegian record collectors are speculating that some of the covers identified as Danish imports may have been produced in Norway. This is based on the fact that on some of these covers there are "shadows" present, and those shadows have not been found on copies found in Denmark. If you look at the Danish section of the book, this single is only presented in one variation, whereas in Norway you can find many variations of this "Danish import" cover.

Like I said, the records whose covers were not printed in Norway have been omitted, which means that the singles Lady Madonna, Hey Jude, Back in the USSR, Get Back, The Ballad of John & Yoko and Let It Be are not shown, since these all have covers printed in Sweden and they are all on display in the Swedish chapter. They are all mentioned, though. One could wish for some of the labels to be depicted, and especially The Ballad of John and Yoko, since this single was available both with a Parlophone and an Apple label in Norway.

We then move on to the EP's and again, only the one with a true Norwegian cover, I Feel Fine (GEOS 225) is displayed. The other two EP's that were pressed in Norway had Swedish or Danish covers. I wish that this book would at least have mentioned their titles. We are talking about the Michelle EP (GEOS 245) and the Yellow Submarine EP (GEOS 262).

As for LP albums, the book depicts four different label styles of the Norwegian pressings, and makes a note of the fact that the early, purple label used on Beatles For Sale has a combined Odeon and Parlophone design, something not found anywhere else in the world.

One would also wish that the book lists the various albums pressed in Norway, but it doesn't. And the chapter ends without mentioning a Norwegian album that has a cover printed in Norway, The Beatles in Hamburg on Tip Records. 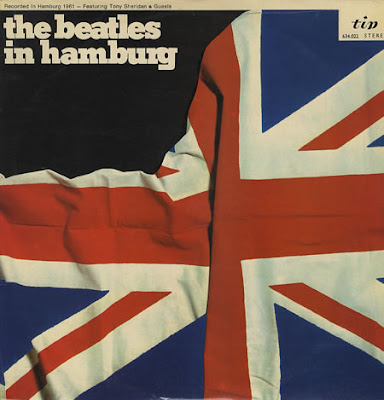 We found it in the Swedish section, mis-identified as a Swedish pressing. This detail from the back cover is a giveaway, though: 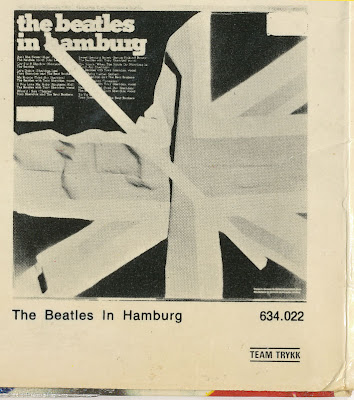 The company "Team Trykk" was based in Oslo, Norway and started printing record covers from the late sixties onwards. This is a 1968 release. The company also printed record sleeves for solo Beatles releases, among them "Double Fantasy" and "Somewhere in England". If you didn't know that Team Trykk was a Norwegian company, the language gives it away. The word "trykk" means "print" and is spelled "tryck" in Swedish and "tryk" in Danish.

Now, this was nitpicking, and extremely so. Only hard core collectors within a country would be able to muster up diverging information of such minor details. But this book is best described as pure pornography for the seasoned Beatles vinyl collector. He (and it's usually a he) will find records here that he has never seen or even heard about before. And, much like Playboy magazine, the book also has foldout pages. It's truly a feast for the eyes. If you want to delve deep into the Beatles discography of any given country, a local publication will bring you more attention to details. But if you want the world at large at a glance, here it is.

You can view sample pages and order the book from it's official website.
Posted by wogew at Wednesday, April 28, 2010

Does anyone know where I can obtain a copy of this book? The official website is sold out sadly. If anyone has any leads, please email me at darra626@snet.net

Can anyone tell me the original cover of Beatles in Hamburg...I have the Union Jack cover but not sure if it is original or not...many thanks...polbas

Where can I buy a copy of 'The Beatles i Noge' or 'A Complete Discography of Norwegian Beatles Records'? Does anybody know?

Both the two Norwegian Beatles discographies are outdated since a lot of new variations have been discovered after their publication. We are waiting for a third attempt of a complete discography.

Thank you very much for your answer, Roger. I missed 'The Beatles Covered' when it was published (and now there's not a way to get it at a reasonable price). My guide to the Beatles' world releases are Christoph Maus's two books, but I always try to get books for specific countries, which are usually much more detailed. It is only last week that I heard about 'The Beatles i Norge', but I do hope there'll be a third, more up-to-date, book soon.