The Beatles and Superman 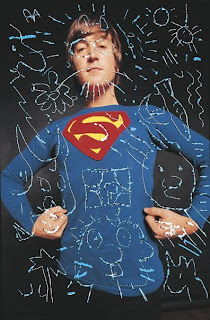 Two of my main hobbies as far as collecting goes, are The Beatles and Superman. And when the two come together, I'm always thrilled. The first time I noticed a connection was when I first watched the Help! film in a local movie theatre in the mid seventies. The scene when Paul plays the organ inside their apartment caught my eye when I spotted some Superman related comic books on the music notes stand. Some years later, the Beatles' movie director Richard Lester was called upon to direct a couple of the Superman films starring Chris Reeves. When interviewed about his relation to the Superman comic books, Lester said that he didn't have any. He was brought up in a strict household where comic books were not allowed, so basically he didn't know anything about the character until he was going to direct films about him. I've always doubted that, because of the evidence in the Help! film. Doesn't a movie director have complete control over everything that's in every frame of film he directs. Recent audio commentaries on DVD films certainly suggest so. Anyway, I was browsing the internet today, when I suddenly came across a blog where the comic books in question were identified. I'd been looking for that information for years! Here are some stills from the scene:


They shared a movie director (see this recent Superman-Beatles news item), and George Harrison's son Dhani used to be roommates with the Superman actor Chris Reeves' son Matthew when they both attended Brown University in Providence, Rhode Island.

The Beatles reunited in a 1978 comic book where Superman fought against Muhammad Ali. 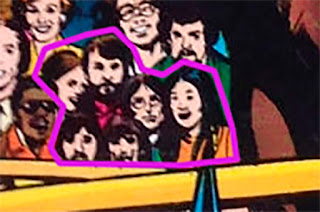 There's a drawing of Superman (with a "B" across his chest) in the booklet from Magical Mystery Tour.

And what's that picture of john disguised in superman ?

John With DC Comics
but Paul is With MARVEL COMICS!!! :D

Wante Tom, like it says in the blog post: "The first picture in this article is John in a Superman suit (only the top piece), which was later used as a book cover, albeit with the famous "S" logo altered."
It was John himself who later altered the photo by scratching marks into the surface.

Hello, John, I referenced this entry with a link and credit, at my blog, Mark's Super Blog - http://markssuperblog.blogspot.com/ -- thanks so much for sharing this!