Misterclaudel restored "She's A Woman" from Shea stadium, using NME Poll Winners footage mixed with Shea footage. The soundtrack is from Shea. This is one of two missing songs from the Beatles' set in the Shea Stadium concert film. The other one was "Everybody's Trying To Be My Baby", which hasn't been restored on this new Misterclaudel release. 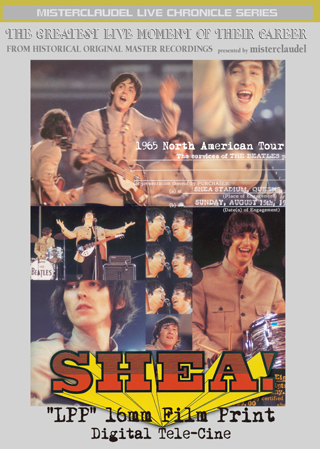 I've been viewing this DVD (MCDVD-24), and it contains two versions of the Beatles' most famous concert. One from the new source, and one with mixed in footage from Anthology. Neither version has the documentary footage, they are just the concert. Colourwise, this is an upgrade to the Darthdisc-based versions, which all has a reddish hue. Picturewise, the new Misterclaudel version may be a little bit less clear than the Darthdisc version, and there are video tape artifacts here and there. The drop-outs on the audio tape has been fixed by using the muffled concert soundtrack for the appropriate part. The version with mixed in footage from Anthology is a nice try, but there are some mistakes made during the video editing process which should have been removed before release. Still, I'd call it an upgrade - but one which will no doubt soon be outdone again.
Posted by wogew at Saturday, December 11, 2010

Hi Roger
I just wanted to say, your blog is really great. I have been browsing through your archives and there is some wonderful stuff there, that I have not seen anywhere else. Well done! and thanks