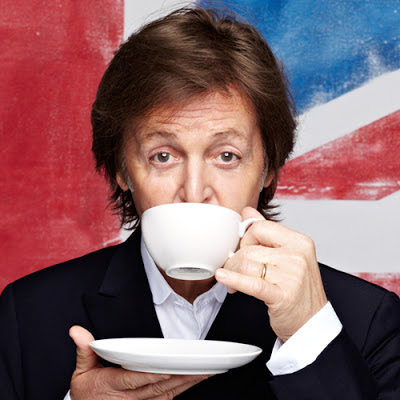 News are in the air regarding Paul McCartney's new album. Having worked on more than fifty different songs with four different producers, the album is nearing the mixing stage in early March. Some last new tracks have just been recorded, All the strings have been added on some tracks thanks to Giles Martin as producer and works at Air Studios recently.
The other producers behind the new recordings are Ethan Johns (son of Glyn), Mark Ronson and Paul Epworth. Paul has also produced a few tracks himself. Paul: “They’re really good people. I knew their work, and I knew they were very good, so I just thought: ‘Let me see if I get on with them.’ I thought one might sort of rise to the top. They’re cool people whose work I liked,” McCartney said, before adding with a laugh: “Of course, what’s happened is, I like them all.”
Asked by the BBC to describe the sound of this forthcoming project, Paul had this to say: “It’s Paul McCartney songs. What can I say? Paul McCartney songs are varied. There will be a ballad, there will be a rocker — I don’t know how to classify them. I guess the worst thing for me would be to call them ‘pop songs.’ But it’s probably what they are. I hate those categories.”
The next stage is selecting an album title, planning the PR stunts and releasing it. Likely, the release date will be after the reissue of the remastered Wings Over America. Beetween 3 possible titles for the new album, one seems to emerge at the moment, with the concept of the cover : it's POP UP, a mix of the old children 3D books full of surprises and the pop up on a computer which can surprise at any time.
Like with everything Paul does these days, plans can change. He may even elect to record more new songs.
Paul is confirmed to perform at this year's Bonnaroo festival which takes place in Manchester, Tennessee across the 13th to 16th of June, and further concerts are in the negotiation stage, including Poland and South America.
Posted by wogew at Thursday, February 28, 2013

Is "Pop Up" seriously a real consideration?

"Pop Up" is at least better than "Kisses On The Bottom."

Independent Record Store Day is coming up in April. Considering Hear Music used the last one to promote Ram, I am guessing they may repeat the strategy and re-release "Maybe I'm Amazed" for the event — announcing in the meantime the date for Wings Over America.

Then, the new album will come in September for the Christmas season, so it can get some songs in the Europe shows as EMI gears up for Beatlemania's 50th anniversary.