Rockshow on the big screen 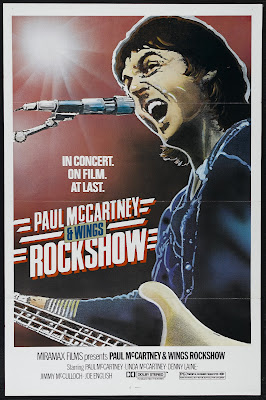 Looks like "Rockshow" is going to be screened at movie theatres again, starting May 15th. But this time it's even further away than last time! Back in 1980 when they first screened the film in movie theaters, the theatre closest to me that showed the film was in Stockholm, Sweden. This time it looks like I would have to travel to Scotland.


Rockshow on screen.com
Posted by wogew at Thursday, March 28, 2013 No comments: Links to this post 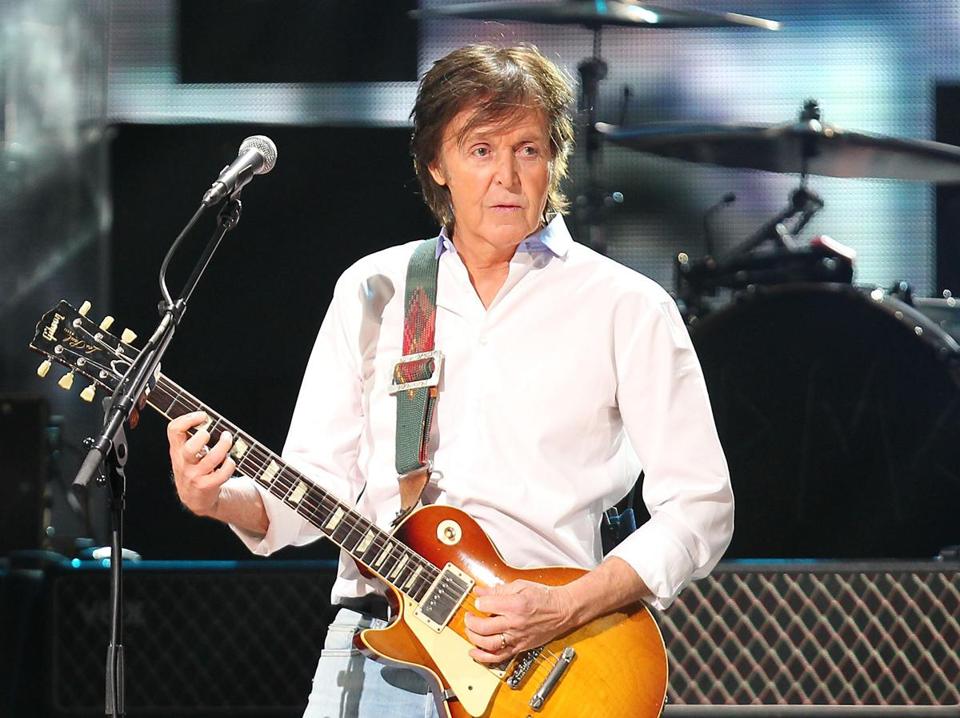 Looks like Paul McCartney's "Out There" tour is planning to visit the Americas this summer. Although not yet announced on McCartney's official website, the Boston Globe reveals that a concert with the man is scheduled for July 9th at Fenway Park. And if he's playing Boston, you know New York City will be included as well. He has played NYC at Citi Field and Yankee Stadium in mid-July so we wouldn't be surprised if he plays NYC in mid-July once again.
So far, we have four gigs lined up for this tour: Poland, Austria, Tennessee and Massachusetts. I'm just hoping someone will bring him over to Norway again during the tour. Or at least Australia.
Posted by wogew at Tuesday, March 26, 2013 1 comment: Links to this post

Wings Over America in May 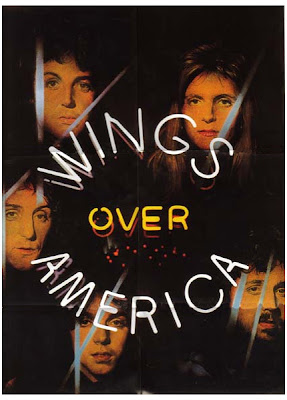 In a recent Universal Music Group showcase, as reported by Billboard, the company revealed their release schedule for 2013 and it was revealed that Concord is planning to unveil their remastered "Wings Over America" in an elaborate package on May 28th.
The original schedule for McCartney's remastered series was going to be "Venus and Mars" and "Wings At The Speed of Sound" as well as "Wings Over America", but plans change. I'm still hoping that the other two albums are going to be released along the way somewhere.
Also, it appears that the plans to release the 1981 "Rockshow" film from the 1976 Wings concert tour separately from the WOA boxed set has been dropped, and the film is now incorporated into the package.What happens to the television special "Wings Over The World" as far as release plans go, we don't know. However, it should fit in nicely with the "Wings At The Speed of Sound" release, just as snugly as the Australian Wings Concert Special from 1975 would fit the "Venus and Mars" remaster. 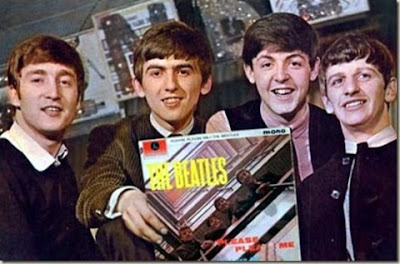 It was fifty years ago today...the release of the Beatles' first LP, "Please Please Me". To celebrate, The Beatles have uploaded this little video for us to enjoy.


Amazon UK too, celebrates. Today only, they've set up a real 1963 page

and are offering a discounted price for the Please Please Me CD. 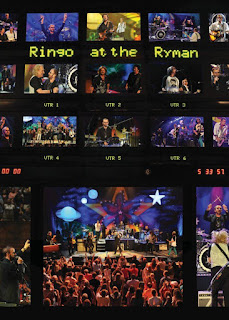 Ringo has released a trailer for his upcoming live DVD. Ringo, being an old-fashioned kind of guy, doesn't seem to have discovered blu-ray yet. 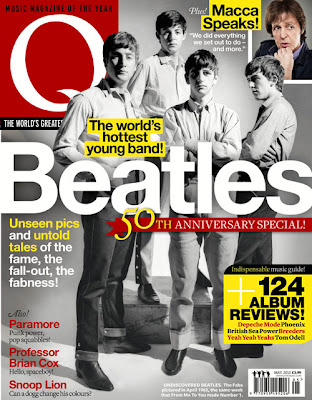 The fabs appear as male models on the cover of the April issue of Q magazine, which will be out in the UK on March 26th and elsewhere shortly thereafter. The magazine celebrates the release of "Please, Please Me" and talks with Paul McCartney about the making of the iconic album. During the interview Paul recalls the 9 hour 45 minute recording session and how the band were not allowed in the control room at Abbey Road's Studio 2. Paul also discusses getting into experimental music revealing how "Yesterday" nearly ended up with an electronic backing! As you may recall, Paul backed himself on organ for the 1965 UK tour during this song.
Posted by wogew at Thursday, March 21, 2013 1 comment: Links to this post

Out There with Paul 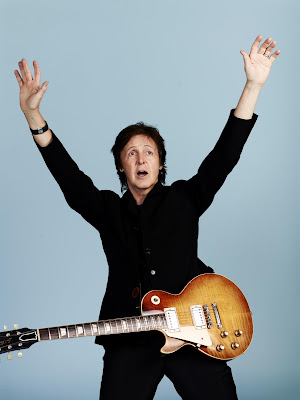 Paul McCartney has announced his first live dates of 2013, which will be part of an all new tour called ‘Out There!’.

Paul is confirmed to play at the National Stadium in Warsaw, Poland on the 22nd June as well as at Happel Stadium, Vienna, Austria on the 27th of June.
The tour will see Paul and his band travel the world throughout the year, even visiting some places they've never been before. Further announcements and dates will be added in the coming weeks so stay tuned to www.PaulMcCartney.com for updates and ticketing details.

Since "Wings Over America" will be the current remastered release to promote, perhaps opening the show with Venus & Mars/Rockshow (in full) would be a nice treat?
Posted by wogew at Wednesday, March 20, 2013 No comments: Links to this post

Anyway, I spun the disc on my stereo equipment and I have no objections to the sound. However, I'm no Hi Fi geek, so I wouldn't be the right person to testify to whether or not the sound quality compares to the Bear Family edition or last year's Time Life 50th anniversary release. What I CAN testify to is that you get awful tired of "My Bonnie" very quickly.
The cover is a replica of a very sought after French original release of said Polydor recordings from back in the day. 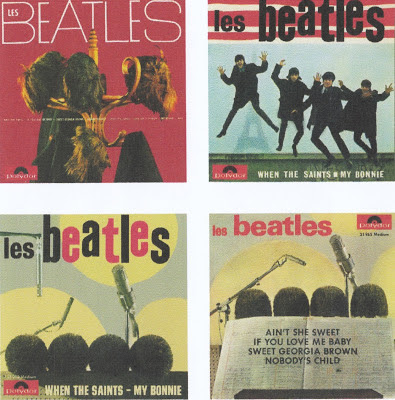 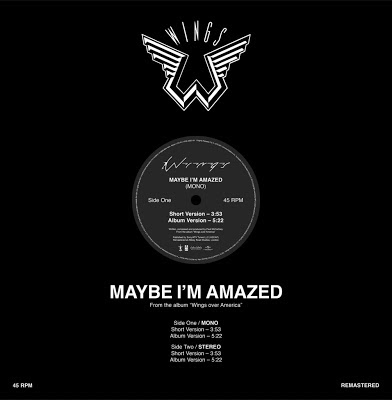 Just like last year when Another Day was issued as a seven-inch single before RAM came out as a deluxe edition, Paul McCartney will preempt the next issue in his Archive Collection campaign – Wings Over America – with an exclusive vinyl offering on Record Store Day.
This time a twelve-inch vinyl record is being issued, and the single in question is the live version of Maybe I’m Amazed, his exquisite love letter to Linda that appeared in studio form on his first solo album McCartney in 1970.
It wasn’t issued as a single until 1976 when the live cut reached number 10 in the Billboard Hot 100. This Record Store Day twelve-inch replicates a promo-only version issued to radio at the time and includes short and long versions of the track in both mono and stereo mixes.
By stating that this exclusive is “to herald the release of Wings Over America”, McCartney is officially acknowledging the reissue of his mammoth triple album for the first time.
More information regarding Record Store Day here > UK Site | US Site
Source: SuperDeLuxeEdition
Posted by wogew at Friday, March 08, 2013 No comments: Links to this post

Peace & Love at the Grammy Museum 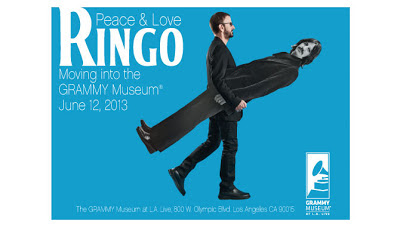 The GRAMMY Museum, in cooperation with Ringo Starr, will debut a major new exhibition, Ringo: Peace & Love opening on June 12, 2013. This one-of-a-kind, limited-run exhibit will offer visitors an unprecedented in-depth look at all aspects of Starr's musical and creative life - as a musician, artist, actor, and as the man the world knows and loves simply as 'Ringo.' It will also aim to propel Starr's universal message of peace and love.
Ringo: Peace & Love is both the first major exhibit ever dedicated to a drummer and the first to explore the extraordinary career of the 7-time GRAMMY Award® winner. The scope of exhibit spans Ringo's early life growing up in Liverpool, from Raving Texans turned Rory Storm, from The Beatles, to becoming a solo artist and then to the All Starrs with whom he is on tour now - this unique collection brings together diverse artifacts, rare and never before seen photographs, documents, personal letters and footage.
Ringo: Peace & Love will be located on the second floor and will include:
It will also be an interactive exhibit, where visitors can take a drum lesson with Ringo.
Ringo: Peace & Love will be on display in The GRAMMY Museum's Special Exhibits Gallery through November 2013, after which the exhibit will tour to select cities to be announced soon.
Source and official webpage:  GrammyMuseum.org

Posted by wogew at Thursday, March 07, 2013 No comments: Links to this post 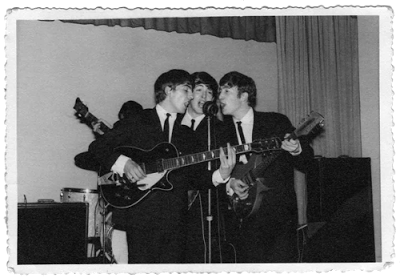 Mark Lewisohn's definitive three-volume Beatles biography which finally debuts this autumn, now has a home on the web: thebeatlesbiography.com. There's also a twitter account to follow: @beatlesbook. The first volume is due out in October, deals with the years prior to 1963 and is entitled "Tune in". We won't be surprised if the other titles will be "turn on" and "drop out"....
Posted by wogew at Sunday, March 03, 2013 1 comment: Links to this post

May 12th, 1963: The Beatles appear on "Thank Your Lucky Stars" and show off their new logo! In the first photo, Lennon is wearing glasses at rehearsal, and Ringo's bass drum is still sporting the "beetle" Beatles logo. In the second one from the actual broadcast, new drums with the brand new "dropped T" logo, as designed by Ivor Arbiter.

The old "beetle" Beatles logo kept it going, though. It was used quite a bit for their French releases (where they swapped the "the" for a "les"), and it was also featured a lot in the "Beatles Monthly Book" fan club magazine.
Posted by wogew at Saturday, March 02, 2013 2 comments: Links to this post

The BeatlesWiki has just launched a radical theory that the guy we circled around in the above photo is, in fact, the young Paul McCartney! As the depicted photo was taken on June 22nd, 1957, this means history must be rewritten.
According to legend, Paul McCartney first encountered the Quarrymen at the famous Woolton village fete on July 6th (the date pinpointed after meticous research by Mark Lewisohn for Philip Norman's book, "Shout!") that same summer. On June 22nd in Toxteth, Liverpool 8, The Quarrymen played one of their first gigs from the back of a coal lorry. It was an official party to celebrate the 550th anniversary of Liverpool receiving its charter from King John. Threatened by violence, after the performance, the band was forced to retreat to Mrs. Roberts' (Charles the photographer' mother) home for sanctuary.
But is it Paul? You be the judge.
We think er...it's not.
Posted by wogew at Friday, March 01, 2013 11 comments: Links to this post