Paul's letter from the Jacaranda 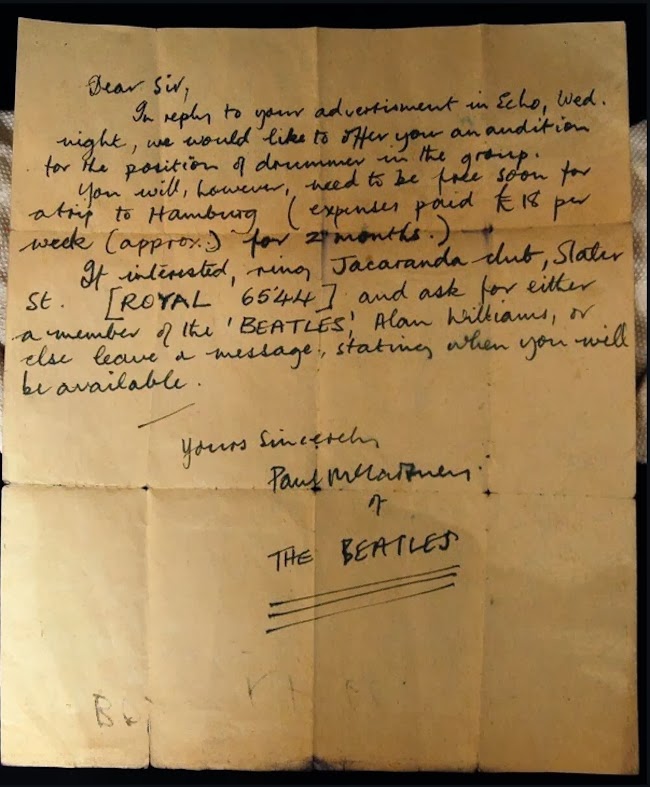 Anorak had a news story yesterday about an old letter from Paul McCartney from 1960. The letter is in reply to an ad in the Liverpool Echo, where a drummer is looking for a band. On the verge of going to Hamburg for the first time, the Beatles were indeed looking for a drummer again. Mark Lewisohn refers to the letter in "Tune in" and concludes that it may not ever have been sent. As y'all know, they ended up with Pete Best.

The letter mentions the Beatles' then headquarter, the Jacaranda Club in Slater Street (soon to be reopened under new management after having been closed for two years), the club's then telephone number and club owner Alan Williams. The club's new owners ought to have it framed and put up on their wall somewhere.
Posted by wogew at Tuesday, February 04, 2014

Back in the day when auditioning drummers were addressed as 'dear sir' :)
Great find and thanks for the sharing!

Wonder if Mark L went back and looked for who was advertising as "Drummer available" in the Echo? Would be interesting to know......

No, they should copy it , have it framed and then put the copy on the wall, otherwise it will be gone by the next day.