The Quarrymen live in Eger, Hungary

From our Hungarian correspondent, Gabor Peterdi:

John Lennon’s original The Quarrymen - Colin Hanton, Len Garry, Rod Davis and Chas Newby – have given their first concert on Sunday 12. May 2019 in Eger, Hungary at Gardonyi Geza Theatre.

The band have arrived on Friday to celebrate the fourth birthday of Egri Road Beatles Museum, together with numerous international guests at Hotel Korona.
They talked about the very early days, sharing their stories – some never heard before – with the press and then had a walk-through at the museum. They unveiled an autographed portrait of their friend, John Lennon before attending a reception at the City Hall.

After visiting the minaret, the castle and other sights, they attended a meet and greet and also stayed for the night’s two concerts by The BeatleVs (Ukraine) and Zoltan Czutor and friends (Hungary). Everybody had a huge get together on stage, singing "Blue Suede Shoes" and "Hey Jude". 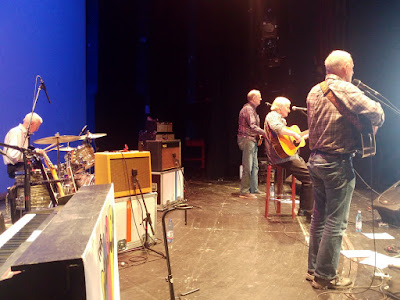 On Sunday the band visited the city’s well-known entertainment center, the "Valley Of Beautiful Women" where they sampled a bit of the world-famous wines "Bulls Blood" and "Stars Of Eger" and left their autographs on the brick Wall of Fame.

After tasting ’Gulash’ – made the way it should be made - they went for a short soundcheck at the theatre where they gave a highly successful one-hour concert, joining Hungary’s best Beatles tribute band The BlackBirds for their joint finale.

It was a night everybody will remember. The Quarrymen is soon following up their unforgettable Hungarian gig with one at the Cavern Club. Thanks Colin, Len, Rod and Chas for keeping the music alive! 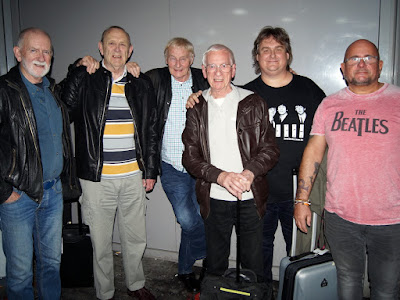 This is embarrassing. Are you gonna cover the kids of the Quarrymen too? This is not news or Beatles news worthy.

Thanks Roger, I love hearing the Quarrymen.

Hey Bulldog, this post is promoting the Beatles museum in Hungary, for the benefit of travelling Beatles fans.

Thanks Roger! Great pictures and story. Hey Bulldog, if you don't like the story, don't read it. Why post something negative to a guy that does so much for the Beatles Community?