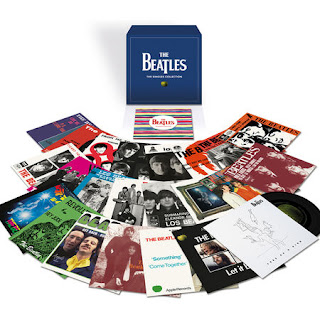 205 euros for 46 songs is 4,45 euros for each one, songs that we already heard a million times. OK, I understand we are buying more an experience than the songs themselves, nevertheless it's a bit too expensive for me, I'll pass on this one.

Yeah, pretty much my feeling, too. I'm happy with my singles from the 1980s and earlier.

How many times? How many? Not me!

"Newly remastered from their original multi-track master tapes" would make these remixes, even if the intention has been to replicate the original mixes.

I hope this doesn't delay the next McCartney archive release. Wasn't it about this time last year? (I'm still hoping for London Town and Back to the Egg!)

Notice there has been a "little change" in the press release. The words "multi-track" has been deleted. So now is "newly remastered from their original master tapes".
As it is in the description of the Beatles Store ("newly cut for vinyl from their original mono and stereo master tapes") or in the titles of the Youtube video ("mastered from the original mono and stereo tapes"), I'm not sure if it is a new remaster or not, but if you listen to the songs in the video (most of them in mono) it seems clearly that it is not a remix.

Obviously remixes of quite a lot of these tracks were released in 2015 anyway.

It's still possible that the discs themselves could sound better than the original discs just through re-cutting, although frankly I'd be surprised if they do.

When Elvis's hits were being re-released (quite) a few years back, they issued 10" vinyl versions playing at 45. If we have to have a Beatles boxset like this, I wish they'd do something like that with them and really go for the best sound quality. I'd probably even buy a set like that.

Simply over priced & on vinyl only? Apple just trying to do another money grab.

I'm curious what tape they are using for "She Loves You." The source for the 2009 "Mono Masters" and the 2015 "1" reissue is the same digital tape, leading me to conclude that the original analog master was either missing or no longer playable.

I believe that the session tapes for "She Loves You"/"I'll Get You" went missing fairly soon afterwards and have, so far, not resurfaced. This is why we only have these in mono, and using the original mono mixes. My best guess would be that they were wiped, or destroyed. For such an iconic single, it's very sad that the tapes were lost. I'm fairly sure that EMI began to preserve the Beatles' session tapes pretty soon after this blip.

Have I imagined it that these singles are pressed on 180g vinyl? Seems very heavy for a single.

Who could this release possibly be aimed at? Millennials who are infatuated with vinyl when they're not streaming? I just don't get it. But then again, I really don't get a lot of what Apple does. Still, I guess it's better than them not putting anything out for public consumption.

I think that it may be aimed at younger fans, who can hear the singles, on quality vinyl, and in the original 7" format. I like the look of it,, and will be saving up me pennies and pounds for it.